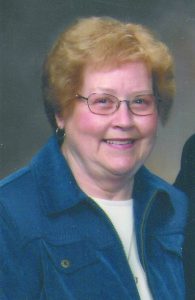 Maxine Bergloid Sjostrand, 84, passed away peacefully at the Kittson Memorial Healthcare Center in Hallock, Minn., on Nov. 11, 2021.
Maxine was born on Feb. 2, 1937, to Fred and Margaret Billings of Lake Bronson, Minn. She graduated from Lake Bronson School in 1955 where she was a cheerleader and valedictorian. She went to work at the Grand Forks Clinic following high school.
Maxine married James Sjostrand of Hallock. They met at a dance in Halma where Jim went to find her after he had “heard about a cute Billings girl” where they danced together for the first time. After marrying on April 25, 1959, Maxine accompanied Jim around the United States while he served in the Armed Forces at places such as Oak Harbor and Pensacola. Maxine was described as “a really good military wife” as she supported Jim and their family during his years in service including two six-month deployments overseas.
Maxine and Jim moved back to Hallock in 1965 with their two children, Jeff and Sonja. She served as president of the Lutheran Church Women (LCW) for several years. She was an avid square dancer with her husband, enjoyed attending church regularly and put on many miles walking around the town of Hallock with her longtime friends, Lou and Kathy. Maxine enjoyed baking, sewing, playing games, crosswords, puzzles and tending to the home. Jim and Maxine also enjoyed traveling and sightseeing for many years.
Maxine will be remembered by many for her cheerful giggle and her good-natured personality.
She is survived by: her husband Jim; son, Jeff (Kim) of Alexandria, Minn.; daughter, Sonja (Mark) of Lancaster, Minn.; grandchildren, Brian, Andrea, Kristen and Rachel; seven great; grandchildren; two sisters, Lucille (Bruce) of Dickinson, N.D., Mayme of Longview, Wash.; and several nieces and nephews.
Maxine is preceded in death by: her parents, Fred and Margaret; and her brother, Fredrick, known as Junior.
There will be a family service on Thurs., Nov. 18 from 6 to 8 p.m. and funeral services at Trinity Lutheran, Hallock, on Friday, Nov. 19 at 11 a.m., with burial to follow. Interment will be in Union Liberty Cemetery, Hallock.
Visitation will be held at Austin Funeral Chapel on Thursday evening from 6 to 8 p.m. with a prayer service at 7 p.m.
Austin Funeral Chapel, Hallock, is in charge of the arrangements. www. austinfuneralchapel.com.