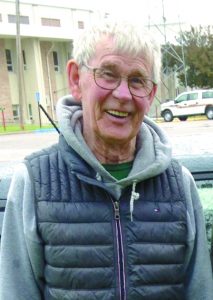 Timothy William James Berg, 77, Hallock Minn., passed away on Nov. 13, 2021, due to complications from Alzheimer’s, with his wife holding his hand.
Tim was born on Oct. 1, 1944, and raised in Hallock. He was a proud member of the Class of 1962 at Hallock High School. After high school, he spent two summers working on a salmon fishing boat in Alaska. He attended Moorhead State, earning a degree with majors in English and political science. Knowing his draft number was coming up, he joined the U.S. Navy.
He was stationed in San Diego, Calif., and once the Navy learned he could play the drums, he was placed in the Drum & Bugle Corps, which doubled the amount of time he had to spend in boot camp. He served aboard an aircraft carrier, the USS Shangri-La. He completed an around-the-world cruise, crossing the equator, with ports in Rio de Janerio, the Philippines, Hong Kong, Japan, Australia and New Zealand. He learned photography while working in the naval photo lab, developing reconnaissance film. He later went on to become an excellent photographer.
After his discharge, he returned to Hallock and started working at the Kittson County Enterprise in 1970. He covered local news and wrote editorials with a liberal perspective. He worked at the Enterprise four different times over 25 years. In 1987, he took a part-time job with the U.S. Postal Service and also wrote a weekly column for the North Star News for a few years. He became a full time rural mail carrier in 1999. He drove 130 miles a day, six days a week and liked the challenge that “neither snow nor rain nor heat nor gloom of night” would stop him from completing his route. He retired from the postal service in 2011. He operated the defoliator during sugar beet harvest for over 30 years. When he found it was difficult to quit that job, he equated sugar beet farmers to the Mafia, saying “they know where I live.”
One night, at the Kittson County Fair, he met Lois Diamond and they were married a year later on July 17, 1976, in Humboldt Minn. He was happy to become the father of two daughters. He was a member of the Hallock Curling Club for over 35 years, curling in a men’s league and mixed doubles with his wife. Tim also enjoyed golf and was a league member for many years. In the first years of retirement, he golfed nearly every day.
Tim was never bored and was always working on something, whether it be home projects, beekeeping or spending hours maintaining his wooden sailboat, which he named Stewball. He took up woodworking, carving and painting many birds and ducks. He was very creative and well read on a variety of subjects. He was pretty witty and considered being labeled a blazing liberal to be a supreme compliment. He had an incorrigible habit of being right and the rare times he was wrong, it wasn’t worth worrying about. If you took it personally and wondered how he had the authority to offer such opinions, you missed the point altogether.
Tim is survived by his wife, Lois; daughters Jessie (Matt Lynn) of Baltimore Md., and Janie (Bradley Waller) of Portland, Ore.; brother and sister-in-law, Terry and Sue Berg; a sister, Geri; in-laws include Nancy Muir, Dennis and Perm Diamond, Marlys Lofberg, Delores and George Bean, and Linda Lindom; along with nieces and nephews.
A private graveside services is planned. For those wishing to send condolences, they can be mailed to P.O. Box 654, Hallock, Minn., 56728.