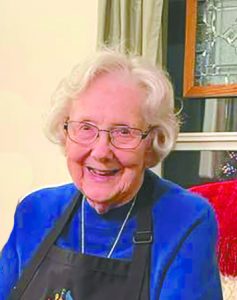 Ruth A. Gatheridge, 91, passed away at home on Jan. 9, 2022.
Ruth was born at Orleans, Minn., on July 28, 1930, to Emmy (Johnson) and Edward Cashman. She and Robert Gatheridge were married on Oct. 14, 1948. They had three children: Deborah (Debbie), Hallock, Minn.; Robert (Beth), Kennedy, Minn.; and Alan, South Heart, N.D.
Family was at the heart of Ruth’s life. She was a devoted wife, mother, grandmother and great-grandmother. Among her many and varied talents, Ruth was an excellent cook and baker, skilled seamstress and accomplished knitter and quilter – a perfectionist in all she did. She was an avid reader and life-long learner who believed in the importance of education. Ruth was determined that each of her children and grandchildren have a college degree. Having grown up during the Depression and WWII, she was resourceful, independent, frugal and hard-working.
Ruth doted on her grandsons, cooking their favorite foods and caring for them at home – which entailed watching Cubs games, reading books together, learning how to sew and garden, and making messes they didn’t have to clean up!
Ruth’s great-grandchildren, who dearly loved their “GG”, were the twinkling lights in her later years. She thoroughly enjoyed each of their unique and individual personalities and looked forward to, and treasured, their visits.
She is survived by her three children, two grandsons: Dr. Brian (Missy) Gatheridge of Detroit Lakes, Minn., and Bradley (Dr. Michele Scully) Gatheridge of Colorado Springs, Colo., as well as her seven great-grandchildren: Brach Peter, Mae Louise, Greta Emeline, Tatum Elizabeth, Breck Robert, Rowan Charlotte, and her namesake, Finley Ruth (“Ruthie”).
Also surviving are her sister, Lois Werre, of Bloomington, Ill., and brother, James (Becky) Cashman of Cedar Crest, N.M., nieces, nephews, and special cousin, Florence Hagen of Hallock.
Ruth was preceded in death by: her parents; husband, Bob; sisters, Joyce Nelson, Kaye Sandul and Peggy DeCoteau; and brother, Robert Cashman.
Ruth is, and will be, profoundly and dearly missed.
A family graveside service will be held in the spring.
Austin Funeral Chapel, Hallock, is in charge of the arrangements. www. austinfuneralchapel.com.