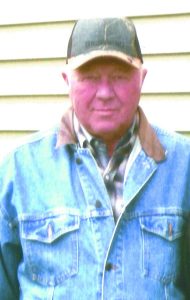 Bryon Carlson, 76, of Lake Bronson, Minn., passed away at his home on Monday, Jan. 24, 2022, with his daughter by his side following a short but courageous battle with cancer.
Bryon Lynn Carlson was born on April 6, 1945, to Swen and Irene (Walz) Carlson. He was the eldest of four children. He grew up on the family farm in Nelson Park township in Marshall County, Minn.. He often spoke fondly of the chores he did on the farm before and after school and the way they did things in the “old days.” Bryon attended school in Karlstad until ninth grade. He then transferred to Northwest School of Agriculture, graduating in 1964. Bryon was baptized and confirmed into the Lutheran faith at Salem Lutheran Church of Stephen, Minn. While in school, he spent his summer months working for farmers in the Humboldt, Minn., area potato houses.
After graduation, Bryon worked construction jobs until he was drafted into the U.S. Army during Vietnam (1965). Bryon completed basic training at Fort Leonard Wood, Mo. He went on to complete special training in instrument repair. Bryon was then stationed in Korea where he remained until he was honorably discharged and returned home. After discharge, Bryon began flight lessons in Thief River Falls, Minn., and completed his commercial pilot and helicopter endorsement in Grand Forks, N.D. Bryon then founded Carlson Air Spray, where he operated as a crop duster for 44 years, “retiring” in 2014. The first plane he started spraying with was a Piper Cub. During this time, he shared his knowledge with flight students who wished to become crop dusters. A piece of advice he shared was, “there are old pilots and bold pilots, but not both.” However, he was. Bryon loved to fly airplanes, even after retirement, he continued to fly.
While crop dusting, Bryon found time for many other hobbies. He enjoyed farming and gardening, which he continued to do for the rest of his life. He also “tried his hand” at raising cattle in the 90s. He excelled at being a cattleman and completely enjoyed it. Bryon has always had a bit of a soft spot for animals. Throughout his life, he raised various other animals, including pheasants, ducks and chickens. In recent years he purchased chickens and ducks to share the joy of them with his grandchildren.
Bryon loved the outdoors. He enjoyed fishing and hunting. He spent many weekends at his cabin at Lake of the Woods. He would take a yearly trout fishing trip with his dear friends at Nester Falls, Ontario. He enjoyed spear fishing northern at Buffalo Bay. When Bryon was unable to fish, he would spend time hunting deer or partridge (grouse). He loved to entertain friends during hunting season at the Sugar Shack.
Bryon was a 50-plus year member of the Lake Bronson American Legion Post #315. As a pilot, he was also a long-time member of MAAA.
Bryon enjoyed visiting his daughter, Aaron and grandchildren daily. He loved to watch them grow and teach them about hunting, fishing and farming. His grandson, Adrian, loved spending time in the tractor with grandpa.
Left to mourn him are: his daughter, Tatum Carlson and Aaron Cochrane, along with his grandchildren Adrian (Willy) and Dahlia (Dolly) of Lake Bronson; sister, Sonja and Daniel Simonson of Eveleth, Minn.; special friend, Patricia Nerguson; nieces and nephews, numerous cousins, friends, and business associates.
He was preceded in death by: his parents, Swen and Irene; sister, Sandra Jenson; brother, Daniel Carlson; grandparents Albert and Anna Walz, Otto and Christina Carlson; aunts, uncles, and cousins.
A funeral was held Saturday, Jan. 29, 2022, at 2 p.m. at Austin Funeral Chapel in Hallock, Minn. Visitation was one hour prior to service. Rev. Galen Nordin, presiding. Music, Galen Nordin. Casket bearers were Scott Shablow, Rick Shablow, Lindly Johnson, Kevin Walz, Tom Griffin and David “Cushie” Lee. Food was served following service at Lake Bronson American Legion. Social hour was held after meal. Military honors will be accorded during spring burial at Riverside Cemetery in Lake Bronson. Date and time is to be determined.
Austin Funeral Chapel, Hallock, was in charge of the arrangements. www. austinfuneralchapel.com.