By Anna Jauhola
Dr. Vanessa Cook has had her eye on Kittson Healthcare for a while.
In 2018, Cook was working in Kansas when a physician’s position opened in Hallock. At the time, Kittson Healthcare employed a different candidate and Cook took a medical director position at Emporia, Kan.
“I thought I’d stay there until I retired,” Cook said. “I was the medical director – seeing patients, teaching with the nurse practitioners – it was fun because I lived in Emporia before. But there was a lot of stress and with COVID, there’s a lot more stress.”
When the physician’s position came available at Kittson Healthcare again in summer 2021, she jumped at the chance to at least further investigate it. She came to Hallock for an interview, to see the facility and tour the community.
And she loved all of it. The people really sealed the deal for her – not only those she met through the interview process, but everyone around town she met was welcoming and friendly, she said.
“When I knew there was a job that would offer semi-retirement and I could work hard the two weeks that I work, and then be with my family the rest of the time … I jumped at it,” Cook said. “I like the setup, I like the clinic and being part of the hospital and nursing home. I could see forming relationships and getting to know people. I could see this as a place to hang my hat.”
So far, it would seem the staff and community feel the same way. Cook said she and all the staff work well together, and she’s gotten to know several people in the community by visiting the coffee shop and other locales.
Cook will be working two weeks each month, opposite Dr. James Surdy. The five to seven days they don’t work will continue to be covered by locum tenens doctors.
So far, in her first few months here, Cook has not been disappointed. In fact, she feels invigorated.
At her previous positions, she was pulled in several directions. At Kittson Healthcare, she covers the emergency room, hospital, clinic and nursing home.
“I have a huge variety in the emergency room already,” she said. “It was trial by fire my first two weeks here. It was busier than all get-out, but I felt like a real doctor again.”
Non-traditional student
Medicine was not Cook’s first profession. She first got a degree in marketing and management, with minors in business administration and German. Afterward, she began working on master’s degree, thinking she’d climb up to a CEO position of a Fortune 500 company.
“I got about halfway through my MBA and thought, ‘You know, medicine would be easier,’” Cook said. “That sounds weird, but I just was starting to feel more drawn to medicine, like a calling.”
So, she hit the books again and got her bachelor’s with an emphasis in chemistry, biology and physics from Wichita State University in Kansas. Then she attended the University of Kansas School of Medicine and graduated from there in 2002. She completed a three-year residency in Omaha and graduated with family medicine in 2005.
“I’ve practiced in Kansas for about half of my career,” she said, noting she’s also worked in Iowa and Minnesota.It was during her first position in Emporia she met her husband, Steve Brunin. She worked with one of his daughters, who is a nurse, at the hospital. Prior to meeting her husband, Cook had been married to her work. Now, she’s married to a retired farmer with deep Kansas roots and two daughters in the medical field.
“They treat me like their mom. They’re awesome,” Cook said. “One an RN and one’s a respiratory therapist. I’m it for medical in my family. Everyone else – preachers, teachers. My dad’s a preacher.”
In his spare time, Brunin operates a food truck called Two Dudes Foods. Although the pandemic has stymied the workforce, Cook has always been willing to help out by running the fry baskets and the window.
“I joke that my second job is, ‘Do you want fries with that,’” she said.
During her two-week shift in January, Cook and Brunin made the 12-hour drive together to Hallock. While she’s here, Cook stays at the call house owned by Kittson Healthcare. While she is very serious about being fully present as a doctor during her two weeks each month, Cook hopes to also find her way around the county and get to know the area better.
“I’m learning a few connections just from going to the coffee shop,” she said. “I also get to see who I’m working with in the community. But I think my husband knows more people in the community by now than I do.”
Freedom, challenges
Cook has found this position to be freeing. The two weeks she works each month gives her a wide range in which to practice medicine and she enthusiastically enjoys each day she is here to serve the community.
Her biggest challenge so far has been learning the computer system, but she’s getting there.
“That, and making sure I had the appropriate warm clothing for the weather,” Cook said. “Yesterday, it was about a 50-degree difference between here and Kansas.”
So far, she doesn’t completely mind the extreme temperatures of Kittson County. But, it does take some getting used to, she said.
When she’s off, Cook is excited to be living her best life where she wants to live. Although she grew up mostly in the Bible Belt, she calls Kansas home. She and her husband live in the country with their two cats and 12 laying hens. 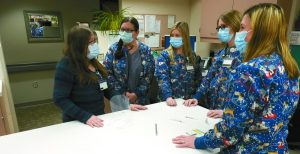 DR. VANESSA COOK, far left, visits with nurses on staff at the Kittson Healthcare Clinic in Hallock during her two week shift in January, pictured, l-r, RACHEL DAVIS, LACEY LUPIEN, SHARI HILMAN and SARAH FAKEN. Cook said she has received a warm welcome from the staff and community.