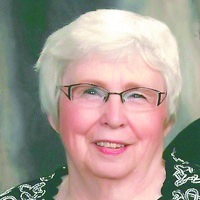 Marlyss Evon LaDoucer, 83, passed away peacefully Thursday, March 3, 2022, at the Karlstad Senior Living Center.
Marlyss was born, April 23, 1938, to John H. and Frieda (Holmgren) Anderson in Hallock, Minn. She grew into adulthood on the family farm and graduated from Hallock High School. She was baptized and confirmed at Grace Lutheran Church.
Marlyss briefly attended Moorhead State Teachers College and the Minnesota School of Business before moving to the Twin Cities. She worked as a secretary at Gillette State Hospital for Crippled Children, where she met the love of her life. Marlyss and Gene LaDoucer were married in St. Paul on June 10, 1961. It was there that two of their three children were born. They moved to Hallock in 1965 where their third child was born. Marlyss was an active hockey mom and helped establish the concession stand in the city’s new hockey arena. She continued in that role until the family moved to Karlstad, Minn., in 1974.
In Karlstad, Marlyss was an active member of First Lutheran Church where she oversaw the library and served the congregation through her commitment to WELCA. She was employed as a teacher’s aide and school librarian. Marlyss also served as a cheerleading adviser. She retired in 2000 after 20 years with the school district. Marlyss was a constant presence at her children’s sporting events. She enjoyed traveling and camping with her husband. Above all, Marlyss was extremely proud of her children, grandchildren and great-grandchildren.
Marlyss is survived by: her husband, Gene; brother, John W. (Pam) Anderson of Hallock; two sons, Gene (Ann) LaDoucer Jr. of Fargo, N.D., and Marc (Susan) LaDoucer, of Hampton, Va.; a daughter, Michelle (Howard) Beito of Craig, Alaska; five grandchildren, Alison, ToniRae, Kara, Joshua and Jordan; three great-grandchildren; Paxson, Axel and Savaya; and special friend, Betty Ness.
She is preceded in death by: her parents, mother and father-in-law, two brothers-in-law and two sisters-in-law.
A memorial service will be held Saturday, April 9, 2022, at 11 a.m. at First Lutheran Church in Karlstad. Interment will be for family members at the Karlstad Cemetery in the spring.
Arrangements are with Collins Funeral Home of Karlstad.
An online guestbook is available www.collinsfunerals.com.