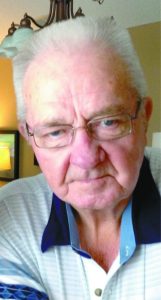 George Curtiss Magnuson, 89, Green Bay, Wis., formerly of Lake Bronson, Minn., died Tuesday, June 21, 2022.
He was born Dec. 29, 1932, in Lake Bronson. A proud Minnesotan to the very end, George enjoyed living and working on the family farm until graduating from Lake Bronson High School, after which he joined the U.S. Navy. He served during the Korean War in Japan and the Korean Peninsula, on the USS Satyr, after which he married his high school sweetheart, Ardelle Skatrud. George just celebrated his 66th wedding anniversary on June 16, only five days before his passing. He excelled at several careers, including as a machinist for Acme Machines in Minneapolis in the 1960s, as a manager of a bowling alley and car salesman in Lake Bronson, which led him to form Magnuson Auto Sales. After moving to Minnetonka, Minn., he held one of his favorite jobs working at Canterbury Downs in Shakopee, Minn., in the early 90s. He loved to tell stories about the horses, jockeys and trainers.
George was also active in bowling leagues in Minnesota prior to his retirement as a snowbird in Mesa, Ariz., for 28 years, where he enjoyed golfing, playing pool, cribbage, as well as many other card games, and a competitive marbles game during the winter months. George and Ardelle moved into an assisted living facility in Green Bay in 2020 due to George’s declining health.
When George gathered with family, storytelling would begin immediately after dinner and would continue into the wee hours of the morning, which would result in raucous laughter and tears of joy. Stories of the farm, his parents, his favorite farm animals and pets, young boy antics, fishing stories from his trips to Lake of the Woods, waterskiing on Lake Bronson, and memories of close friends and family no longer with us. George will now be included in those memorable stories, never forgotten, always loved with laughter and tears.
He is preceded in death by: his parents, George and Pearl Magnuson; his brothers, Paul and Dan Magnuson; and his sisters, Betty Ann Englund and Beverly Fransen.
He is survived by: his loving wife of 66 years, Ardelle Magnuson; his daughter, Zeeda Magnuson (Tracy Steiner); his brother-in-law, Bert Skatrud (Cheri) in Eden Prairie, Minn.; his sisters-in-law, Judy Magnuson in Eureka, Ill., and Arlette Wangen in Big Lake, Minn.; and many nieces and nephews.
Many thanks to Compassus Hospice and the many healthcare professionals in the Green Bay area for the care provided to George in his final days.
Condolences may be sent to Ardelle Magnuson, c/o of Aspire, 825 Cobblestone Lane, #103, Kimberly, WI 54136.