By Anna Jauhola
No doubt shoppers have already noticed a major change inside the Farmers Store.
Last week, Red River Refrigeration installed upright coolers along the east end of the store in the produce and meat sections.
“This is the last piece of the refrigeration puzzle at the store,” said Tom Swanson, Farmers Store CEO, of his latest investment to keep Hallock’s grocery store up-to-date. “Now three-quarters of the perimeter of the store is all door coolers and/or freezers. It’s a win-win.”
The Farmers Store has been a major fixture in Hallock for nearly 150 years. The current building became a reality in 1994 and the recently removed produce and meat coolers were original equipment, Swanson said. He also replaced the freezers on the west end and coolers along the north end last year.
“It was way past time to replace them,” he said. “The stuff we have now is the latest and the greatest. They have LED lights. Everything should last longer.”
Produce and meat went through four defrost cycles a day in the previous coolers, which were open faced. In the new upright coolers, which all have doors, products will only go through one defrost cycle.
“Less is better to keep the product fresher and happy,” Swanson said.
On top of that, the store will expend less energy and the coolers provide at least double the amount of space. This will give customers more variety and Swanson the ability to provide different types of food customers may want to try. He said for sure lettuce salad mix varieties will be expanded.
“I can show you the catalog. There are literally hundreds to choose from,” he said.
But, as always, Swanson encourages all customers to visit with him or any manager about foods they’d like to see at the store. They’re willing to order anything and give it a try.
“For every one customer that says they want something (we don’t have) there’s probably seven others that don’t bother to mention it to me,” he said. “So, by all means, let me know if there’s something you want. Because now we have room and we can do it right. And it’s probably in some recipe I don’t know about.”
These energy saving, space-expanding coolers may be the most recent update to Hallock’s grocery store, but they are not the last.
Swanson alluded there will be other improvements in the future.
So, keep your eyes open, shoppers, and submit your product requests. 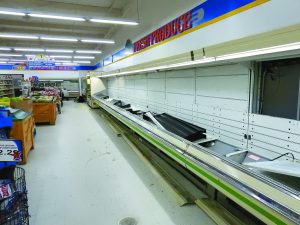