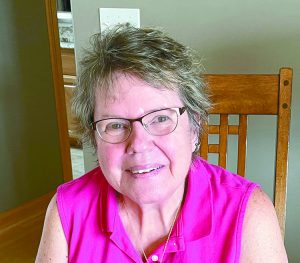 Angelyn Cameron, 75, Detroit Lakes, Minn., died on Monday, Oct. 24, 2022, at Cottagewood Senior Communities in Rochester, Minn.
Angelyn Marie Larson was born on Nov. 24, 1946, in Grand Forks, N.D., to Anders (Andy) and Virginia (Peggy) Larson of Hallock, Minn. Angie grew up in Hallock and graduated from Hallock High School in 1964. She continued her education at Moorhead State University, graduated with a degree in business, and later worked for many years in the MSUM Administrative Affairs office.
Angie met Gary Cameron, of Hallock, in kindergarten, where they exchanged friendship rings and became lifelong best friends. Angie and Gary were married on Dec. 28, 1965. They made their home in Moorhead, Minn., and were members of Christ the King Lutheran Church. They had three children, Kris, Kim and Ben, and spent many years enjoying entertaining friends and family at their cabin in Detroit Lakes, where Angie eventually settled after Gary’s death in 1994.
After retirement, Angie enjoyed volunteering for the Red Cross and baking all kinds of goodies for her friends, kids and grandkids. She later married Rick Dickson of Hunter, N.D., in 2014. Rick and Angie enjoyed traveling and attending shows and concerts and spending time at Lake Melissa.
Angie is survived by her sister, Virginia (Byron) Danielson, Fargo, N.D.; her children, Kris (Mark) Feldman, Magnolia, Texas, Kimberly (Tim) Metzger, Rochester, and Benjamin (Shannon) Cameron, Rochester; as well as 8 grandchildren, Kole, Mason and Grant Feldman, Mikala and Nickolas Metzger and Jaxon, Peyton and Jett Cameron; as well as numerous nieces and nephews and in-laws.
Angie is preceded in death by her parents, her sister, Marilyn Larson, her sister, Kathy Braun, her husband, Gary Cameron, and her husband, Rick Dickson.
A celebration of life will be held during the summer of 2023 in Angie’s beloved Detroit Lakes (details announced at a later date) with interment at Greenwood Cemetery in Hallock.
In lieu of flowers, the family asks that donations be made to Alzheimer’s and Dementia research (https://act.alz.org).