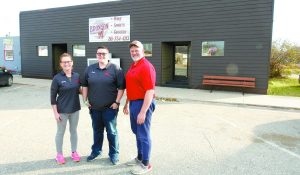 MINDY, KAYLIE AND RON KJELLAND stand outside Bronson Market. The family purchased the business and building earlier this year, renovated it and held a soft opening the last week of October. (Enterprise photo by Anna Jauhola)

By Anna Jauhola
Last spring, a family from Thief River Falls bought the apartments in Lake Bronson. As they began fixing up the structure, another building caught their eye.
“We kept watching this really cool historic building. We saw a for sale sign pop up in the window and I saw an opportunity,” said Mindy Kjelland.
Mindy and her husband, Ron Kjelland, along with their daughter, Kaylie Kjelland, are now in business together running Bronson Market. The store closed in April 2022 and was put up for sale, and it wasn’t long after that the Kjellands took the dive and bought the building and business.
The community soon saw progress as they removed the facade to completely revamp it. In the process, they uncovered the original sign for the Lake Bronson Farmers Store. They left the sign on the building, but covered it back up for future generations.
The renovation included adding a doorway to the east of the main door, which now leads to the liquor store.
“This will keep the business viable,” Mindy said. “That’s one of the biggest reasons we decided on a liquor store/grocery store. Also, I love running a liquor store. I know the industry, I know the vendors, and these small stores need supplements to make something like this go.”
The Kjellands also worked with local contractor Phil Matthew to update the interior of the store with new paint and flooring, as well as a custom built central checkout counter.
Before Lake Bronson, the family owned and operated the Salol One Stop, a convenience and grocery store along U.S. Highway 11 between Roseau and Warroad. They sold the store a few years ago and moved back to Mindy’s hometown of Thief River Falls.
“I got bored,” Mindy laughed. “I tried working for somebody else, and it turns out I just like working for myself. And I love small towns. I love retail, so here I am.”
Mindy and Kaylie are in business together, and are excited to officially reopen a fully stocked grocery store in Lake Bronson. Kaylie’s partner, Kim Goodrich, will also be a friendly face running the store during the week. Ron had worked at Polaris for 24 years and later Marvin Windows in the maintenance department. He is now a corrections officer for Pennington County Sheriff’s Office. When he’s not on duty, he is at Bronson Market.
Continued on page 3
The beginning process wasn’t entirely without complications. When they applied for a full liquor license from the city of Lake Bronson, one person attended that city council meeting in opposition. But the council approved it and the community as a whole has been supportive, Mindy said.
“We are not here to hurt anyone’s business,” she added. “I think when small towns start losing their businesses, it hurts everybody. There’s a lot of opportunity here if people would take it and run with it.”
They also worked with the city and obtained a low-interest loan to partially fund the store. This, along with their savings and other funds, made it possible to reopen the business. 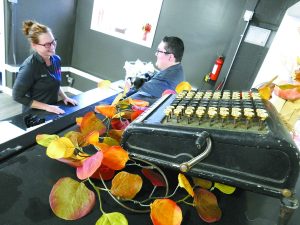 MINDY AND KAYLIE KJELLAND visit at the new checkout counter in Bronson Market. The antique cash machine in the foreground was discovered in the building and placed on display, along with other historical treasures found in the basement.
(Enterprise photo by Anna Jauhola)

During the early cleaning process, Mindy, Ron and Kaylie found several treasures in the store’s basement. They have placed these items throughout the store – an old scale, a vintage shopping cart, old potato sacks, an adding machine, an old Norelco electric shaver, a wooden Velveeta box.
“It’s a little museum as you walk around, if you pay attention,” Ron said.
Much of what customers will see is a mix of new and old. The Kjellands invested in five new coolers, but are also waiting for other coolers to fizzle out before investing more.
Mindy is working with all the vendors she has worked with before to get both stores fully stocked. As of last week, the liquor finally began to arrive, but in limited quantities. And the grocery store is about three-quarters stocked, and they plan to have a full selection of dairy, produce, meat and shelf items.
“We are planning for lots of growth,” Mindy said. “We want to bring in the Lottery. We want to bring in bagged tobacco, lots of little things.”
“A lot of people have been asking about the lottery. Nobody does it in town,” Ron added.
Another future addition will be bait and tackle. But they want to focus on one thing at a time.
So far, the Kjellands have been met with kindness, warmth and excitement from the community.
“We’re grateful for the reception we’ve had and we’re looking forward to meeting everybody,” Mindy said. “Meeting the community. I love that. I’m having a lot of fun.”
The Bronson Market is open 9 a.m. to 7 p.m., Monday through Saturday, and 11 a.m. to 6 p.m. on Sundays. They plan to have a grand opening in the spring.