By Mark Johnson, coach
KCC 82 – SAC 62
KCC rolled down Highway 75 Tuesday, Dec. 20 for a conference showdown with the Stephen-Argyle Storm. The Bearcats were coming off back-to-back wins the previous week and had their sights set on continuing their solid play.
The opening minutes of the contest took on the look of most games with a feeling out process as each team worked to identify and capitalize on their advantages. The Storm were the first to figure it out. SAC’s 2-3 zone kept the Bearcats shooting over the top of the defense and held them to one shot per possession.
Offensively the Storm pushed the tempo and beat the Bearcat defense in transition and forced fouls and converted on layups and free throws. The Storm executed that approach effectively and pushed out to a 25-13 lead and had the Bearcats on their heels. KCC flipped the script on the Storm and went on a 12-0 run and tied the game at 25-25. The Bearcats started jumping the passing lanes, getting deflections, and converting on transition baskets to pull the game even. The Storm made the last two baskets of the first half and held a 35-31 advantage at the break.

Read the full story in the Dec. 28, 2022, edition of the Kittson County Enterprise. 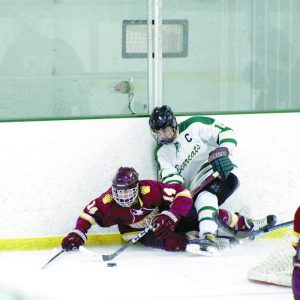