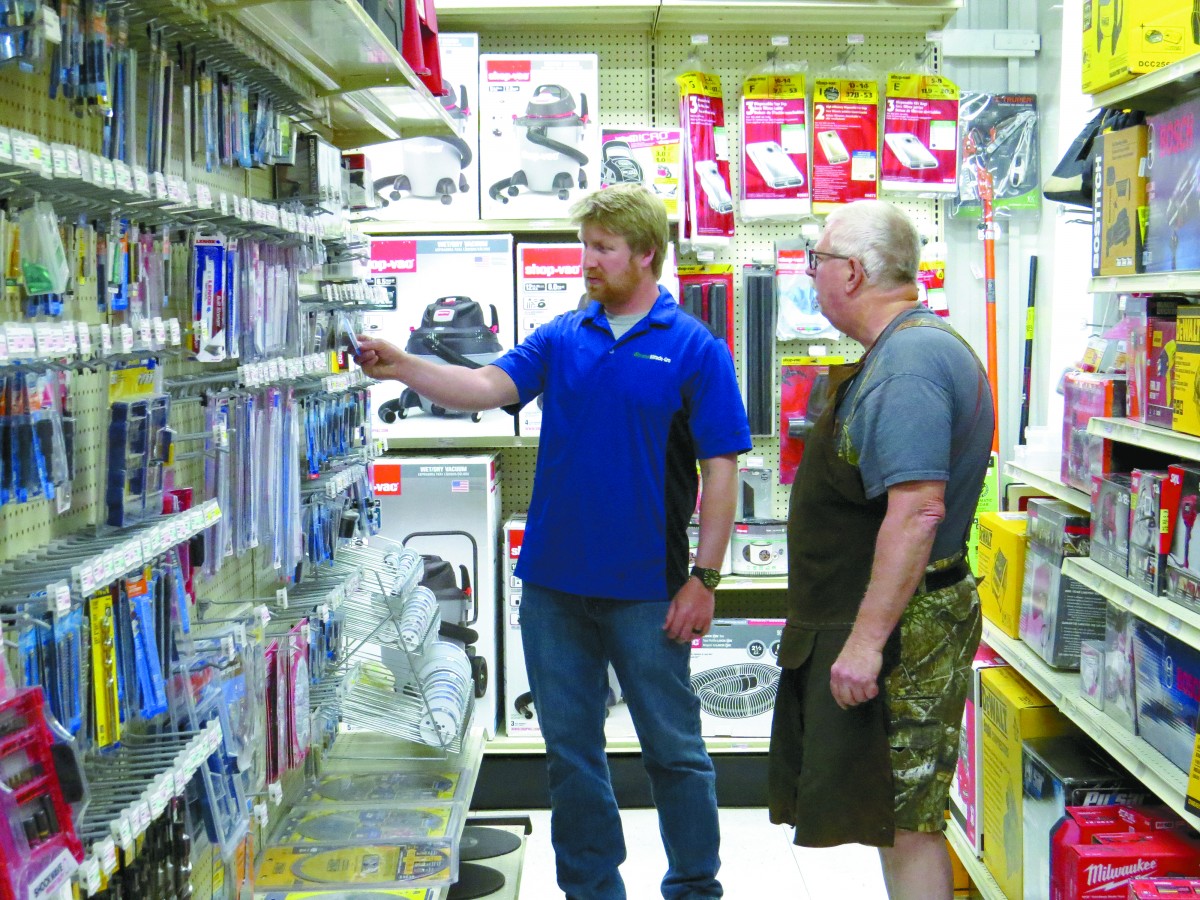 Gullander’s Hardware has been a part of Hallock since 1894 and is still run by the same family. Tim Gustafson, and his son Guy, now operate the business with plans for Guy to take over when Tim decides to retire. Above, Guy provides personal service to customer Dennis Kinkead.

The duo, and employees, will hold a week-long celebration from June 17 to 22, including giveaways, cookouts, in-store sales and other events at the store. Groovy Grub will set up on Thursday, June 20. A representative from Traeger Grills will grill up a meal on Saturday, June 22. The Gustafsons will also treat the community to tasty brats and hamburgers during some noon hours.

Guy said the giveaways will be quality items, such as coolers or charcoal grills. It will definitely be a celebration worthy of the business’s history.

According to the Hallock Centennial book, John Gullander arrived in Hallock from Sweden in 1887. Tim is Gullander’s great-grandson. Gullander was 23 years old when he began a blacksmithing business. When the town built a brick school building in 1894, Gullander and his partner, Theodore Nelson, purchased the former two-story school house and moved it to Second Street.

“They rolled it up by horses to get it to its current location,” Tim said.

The building still stands, labeled as Gullander’s Hardware, on Second Street, across the alley from another century-old building currently occupied by Bean and Brush Creative Coffee.

“I can remember as a kid my dad having to go down and check the coal stove in the basement,” Tim said.

In 1995, when the Farmers Store block of buildings was demolished, Tim made the decision to build a new store along Highway 75. To this day, many merchandise dealers the Gustafsons work with often recall when Guy and his brother, Brock, helped move items to the new store by wheelbarrow.

“All day long the boys would bring stuff over, back and forth,” Tim said. “They’d remark about these little boys that worked so hard.”

Guy was about 8 years old at the time and recalls he and his brother transporting a barrow-full of nuts and bolts.

“Somehow or another, we tipped it over. And it was, well, it was kind of a poor deal,” Guy said with a chuckle.

Although the boys spent their childhoods in the upstairs of the old Gullander’s building, it wasn’t a long-standing dream to dive in and own the business. It took a move to the Twin Cities area for Guy to realize the slower pace of the Red River Valley was his calling. Guy enrolled at Gustavus Adolphus College in St. Peter, Minn., but after six months, he moved back north.

He worked at Gullander’s throughout college and earned his business management degree in 2010, at which time he began his full-time job at the store. Tim and Guy may not always see eye-to-eye, but they work out their disagreements professionally for the benefit of their customers.

“I’m excited he’s here and willing to take over,” Tim said. “My father was excited too. I feel very blessed to work alongside my son. I just feel, as a parent, how fortunate can you be?” 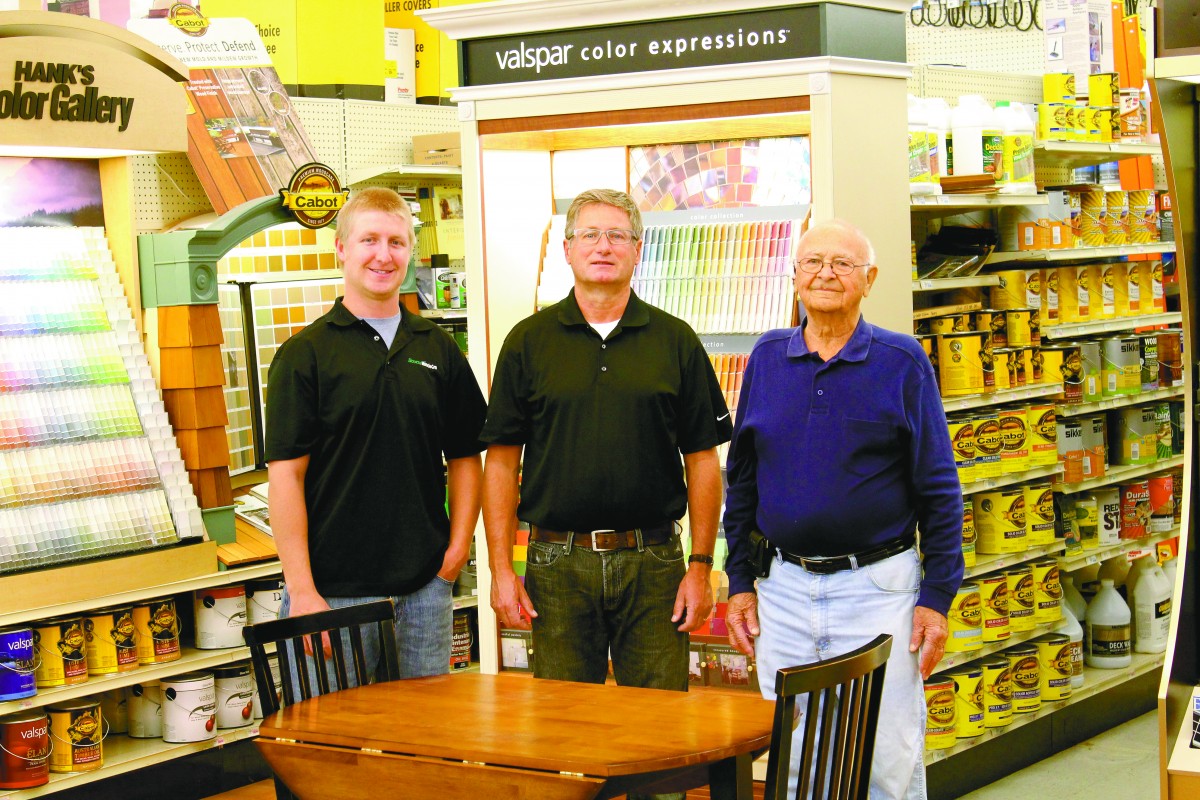 Three generations at Gullander’s Hardware in Hallock pictured are Guy, Tim and Jim Gustafson. Jim has since passed away, but Guy and Tim are now working together in the 125-year-old business.

Now the father-and-son team is continuing the Gullander’s family tradition of providing excellent service and selling quality products. Tim and Guy agree they’ve been able to stay in business due to these, and other, key standards.

“Giving a fair price, too, the best we can offer. And also, being considerate of others and trying to work with other businesses,” Tim said.

This philosophy has worked well in an age of bigger is better, leading many people to drive out of town to shop. Tim and Guy have developed solid relationships with faithful customers not only in Hallock and the surrounding area, but into North Dakota. Tim said they have several who travel from Pembina to shop at Gullander’s Hardware.

“Sometimes, if we don’t have it here, it means that’s a 75-mile drive one way to find that item,” Tim said. “So, we try to stock a lot of items sometimes our company said we shouldn’t be. I will tell them our circumstances and why we do.”

By understanding their market and customers, the Gustafsons carry on not only a love for the Hallock area but a responsibility of providing everyday items no one should have to drive miles to obtain.

As they celebrate the 125th year of Gullander’s Hardware, the Gustafsons also celebrate that the original building will once again be occupied. By the end of the summer, the building on Second Avenue will transform into Last Chance Trading Post, a wine bar and merchantile featuring locally raised Scottish Highland beef.

“We love the old Gullander’s building,” Tim said. “It really is a staple of downtown Hallock. I’m very happy it’s still there.”

Guy, who has become involved with revitalizing downtown Hallock, agrees.

“I think it will be really fun,” he said of the new business opening. “Not only just to have another building not be vacant, but the fact it is the building I grew up in. It’ll be very exciting for it to be up and running again – to see people going in and out of it.”

As far as moving the family business into the sixth generation, Guy hasn’t given it too much thought.

“My daughter hasn’t expressed a whole lot of interest yet,” Guy said of his 2-month-old daughter, Capri. “But Hardware Hank did just send out a Hardware Hannah. So I might have to get her one of those.”

Looking toward the future, Guy hopes to retain faithful customers, expand the sales area, put his own stamp on the business and continue providing great service as John Gullander did from day one.