By Anna Jauhola
The City of Hallock declared a state of emergency in an emergency meeting on Friday, March 20. The city council met at the city hall in the basement and spaced more than 6 feet from each other. Councilor Kevin Waller attended and voted by phone, which is allowed in emergency instances.
City Administrator Aimee Sugden streamed the meeting via Facebook Live and Mayor Dave Treumer addressed the public noting the declaration does not mean there is cause to panic. An emergency declaration allows the city certain abilities, like applying for federal reimbursement later on down the road.
The council also approved during the meeting to suspend late fees and shutoffs for city utilities for the next 90 days.
Sugden reported that city employees are working as normal and are encouraged to stay home if they feel ill.
Fire Chief Kevin Klein said they have suspended all meetings and training. Police Chief Mike Docken said all his trainings have been canceled and he is mostly dealing with people over the phone when possible.
The mayor commended the residents of Hallock for following recommendations made by the Centers for Disease Control, Minnesota Department of Health and Kittson Healthcare. The town has been quiet over the last several days and those out and about keep a fair distance between each other.

Officials urge caution as COVID cases rise in the county 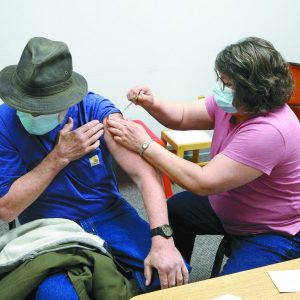 Kittson Healthcare does not expect COVID vaccine this week