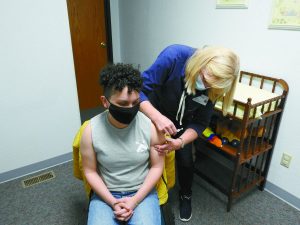 PEOPLE ACROSS THE AGE SPECTRUM received the COVID-19 vaccine last week at the clinic in Hallock. Above, DANI PEREZ received the vaccine from Public Health Director CINDY URBANIAK.

By Anna Jauhola
Anyone 16 and older can now receive the COVID-19 vaccine, which is good news for Kittson County Public Health continuing to vaccinate anyone wanting the shot.
Cindy Urbaniak, public health director, said the priority groups have pretty well been covered in the county and she is hoping more people will take advantage of signing up for future clinics. The overall goal across the U.S. is to immunize 75 to 80 percent of the population to help create herd immunity.
While Public Health has taken pride in not wasting a single vaccine dose, Urbaniak said they had 18 doses left over from the March 25 clinic.
“They are now at the Kittson Memorial clinic. The clinic is encouraging the public to call in to the clinic and get vaccinated with the vaccine we have,” Urbaniak said.
The March 25 clinic saw open spots toward the end, so personnel began calling the schools to let them know. Urbaniak said a few high schoolers came and got their vaccinations. Anybody under the age of 18 must receive the Pfizer shot, she said, as it is the only one licensed for people under 18.
This week will be quieter for vaccinations as Kittson Healthcare is only slated to receive 75 doses.
However, 136 people are scheduled to receive second doses next week and the facility is set to receive at least 100 doses for patients’ first shots.
Kittson Healthcare will hold a vaccine clinic this Thursday, April 1 from 1 to 4 p.m. at the Karlstad Clinic. Another clinic will be held at the Assembly of God Church on Thursday, April 8.
In the meantime, Kittson Healthcare personnel are working on a plan to begin offering vaccines at the clinics. But it is only in the discussion stage.
“We’ve done it the way we’ve done it because it’s a very efficient way to manage the vaccine we have,” Urbaniak said. “Again, it’s our goal to not waste any doses. Once a vial is opened, you have six hours to use that vaccine. With the Johnson & Johnson and Pfizer products, it’s a little easier because they’re only five or six doses in that vial. Where as Moderna is 10 to 11 doses in that vial.”
The week of March 22-26, the county saw three new cases of COVID-19, which equates to a low positivity rate of 1.05 percent. With that rate, the Kittson Healthcare facility has been able to dial back its testing to once a month. While they are only required to look at the positivity rate once a month, Urbaniak said they’re reviewing it weekly to shift testing as needed. Overall, 90 percent of the nursing home residents in Hallock have been vaccinated.
Kittson Healthcare is hoping to distribute a survey – possibly by Facebook – to get a better handle on the population’s vaccination plans. That way, they can better plan for how much vaccine the county needs from the government. Public Health continues to do its best to educate people about the vaccine. Urbaniak said some people choose Pfizer and Moderna over Johnson & Johnson for ethical reasons. Johnson & Johnson’s vaccine is more traditionally created, which typically has connection to aborted fetal cells, she said. Others are wary of the mRNA vaccines as there is misinformation that those vaccines change a person’s DNA.
“Which it doesn’t,” Urbaniak said. “We’re trying to get accurate information out there.”
If you want to be vaccinated or have questions, call Kittson Healthcare at 218-843-3612 in Hallock and 218-436-2251.