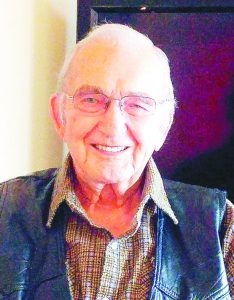 Allan Ray Gustafson, 96, of Hallock, Minn., passed away at Kittson Memorial Healthcare Center in Hallock on Sunday, June 7, 2020.
Allan Ray was born June 1, 1924, the son of Oscar L. and Ida (McKibbin) Gustafson, at the family farm in Granville Township, Kittson County.
He attended rural school district #54 (Grasshopper School) in Granville Township and high school at the Northwest School of Agriculture, at Crookston Minn. After high school he returned home to farm with his father and brothers until his retirement in 1986.
On Aug. 3, 1947, he was united in marriage to Sylvia Downs of Westhope, N.D. They made their home in Granville Township. They were married for 66 years when she passed away in 2014.
Allan served on the township board, the Federal Land Bank Board, the Kittson Soil and Water Conservation District Board, and was on the founding board of the North Kittson Rural Water District. He was a member of the First Presbyterian Church of Hallock and had served as an elder and deacon.
Allan Ray moved into the Rivers Edge Assisted Living in Hallock, April 2014. He enjoyed spending time with family, friends and neighbors. He was an avid reader, loved playing cards, and doing crossword and Sudoku puzzles.
He was preceded in death by his wife, Sylvia; eldest son, Allan Jr.; his parents; and brothers and their wives Linden (Harriet), Delbert (Dorothy), Lionel (Lue), and Jim (Janyce); and a sister, Francis McKibbin (Watt) Vaughn.
He is survived by sons, Bob (Jane), Fargo, N.D., and Bruce (Marilyn) Lancaster, Minn.; daughter-in-law, Pauline, Thief River Falls, Minn.; four grandchildren, Derek, Jason, Greta and Jacob; seven great-grandchildren, Ben, Addie, Sylvie, Gavin, Henrik, Ida and Viktor; and many nieces and nephews.
Graveside services wereheld  Saturday, June 13, 2020, at 11 a.m. in Greenwood Cemetery Hallock. Rev. Marge Landwehr, presided.
Arrangements with Austin Funeral Home, Hallock, www.austinfuneralchapel.com.