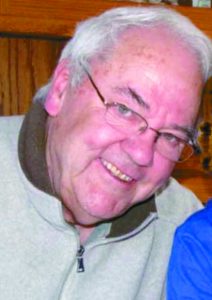 Joseph Edward Bouvette, 79, of Hallock, Minn., passed away unexpectedly during an accident in his yard in Walker, Minn., on Sunday, June 28, 2020.
Joe was born to Calvin and Francis (Zamzow) Bouvette on March 27, 1941, in Hallock. He attended school in Hallock, where he earned his Eagle Scout in 1958 and graduated in 1959. He attended the University of North Dakota where he played golf, baseball and basketball, and was a member of Sigma Alpha Epsilon. He graduated in 1963 and went on to the University of Minnesota where he obtained his doctorate of dental surgery in 1965. He was a part of Delta Sigma Delta during his time there.
On Sept. 19, 1964, he married his high school sweetheart, Sandra Swenson, at Red River Lutheran Church. They settled in Hallock, where he opened up his own practice in dentistry, and retired in 2004. They had two daughters, Rhonda and Angela. Joe was an excellent father to his children, a faithful husband to his late wife Sandra, and deeply loved his grandchildren.
Joe was a man of many interests. Being an excellent golfer along with his many good friends, they played against tough competitors and won many tournaments. He was a member at Two River in Hallock, Tianna in Walker, and played in Arizona.
He enjoyed curling for many years in both men’s league and couples’ league with Sandra.
While hunting and fishing throughout all of the Midwest, as well as fly-in trips in Canada, Joe was designated cook at the hunting shack – especially for breakfast.
He played all sorts of card games with friendly competition and a love to socialize.
He was a basketball and football referee for various age groups for 50 years.
Being an antique enthusiast, he took pride in both buying and selling items, in person and on eBay.
He enjoyed bottling at Far North, running the corking machine, and drove and delivered cars for C&M Ford.
Joe had a passion for his community and was a city council member from 1970-1986, which included being the Mayor of Hallock for half of that time. He was a commissioner of Kittson County for 32 years, and acted as chair for much of this time.
At the time of his passing, Joe was currently serving on the North Kittson Rural Water Board as chair, as well as the Chair of the Northwest Regional Development board, where he had served for 47 years!
In 2018, Joe received the esteemed Association of MN Counties Presidential award. Other community service included a multitude of other committees as well as Grace Church, the Lions club and Chamber of Commerce.
Joe will be greatly missed and remembered by his two daughters, Rhonda (Scott) Berger of Alexandria and Angela (Robert) Pioro of Duluth; grandchildren, Joe, Emily and Ben Berger and John, Jacob and James Pioro; sisters, Hope Thornberg of Golden Valley, and Catherine (John) Lloyd of Plymouth; sisters-in-law, Marleen Swenson of Hallock, Mary (Dan) Juhl of Red Lake Falls, and Debi (Bruce) Jensen of Moorhead; and many nieces and nephews.
Joe was an eternal optimist, inclusive, determined, unpretentious and a faithful friend to many.
Funeral services are scheduled for Tuesday, July 28, 2020, at 1 p.m. at the Two River Golf Course in Hallock. Interment will be in Greenwood Cemetery, Hallock. Please bring lawn chairs for seating. Visitation will be held at Grace Lutheran Church on Monday evening, July 27, from 5 to 7 p.m. The alternate site for the funeral service in case of inclement weather will be the SWCD building at the Kittson County Fairgrounds, again bring your lawn chair. CDC guidelines with social distancing will be followed.
Austin Chapel is in charge of the arrangements. www.austinfuneralchapel.com