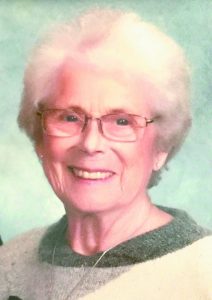 Melba Lucille Younggren, 89, of Hallock, Minn., passed away peacefully on May 2, 2020, at the Kittson Healthcare Nursing Home where she received compassionate care and frequent visits from family and friends.
She was born Jan. 3, 1931, in Kennedy, Minn., to Axel and Edith Larson, the fourth child of six. Melba grew up in Kennedy, attended country school and graduated in 1949 from Kennedy High School. She went on to study at Aakers Business College in East Grand Forks, Minn., and eventually became the librarian at the University of North Dakota, Medical School. While at the university, Melba particularly enjoyed the daily interaction with the med students and faculty members. On occasion, she rescued animals before they entered lab studies.
Melba married Duane, her husband of nearly 60 years, in 1956. Shortly thereafter, Melba joined Duane during his Army deployment to France where she recalled many adventurous moments, some involving mice and others involving long relaxing days on the beach.
Melba initially made her home with Duane in East Grand Forks, where they had their first daughter and later moved to Grand Forks, N.D., where their second daughter was born. While in Grand Forks, Melba worked full time at the medical library; she was active making their house a home, raising their children, undertaking numerous sewing projects for the girls, supporting the university faculty club and always making time for family.
In 1974, Melba and Duane returned home to Kittson County where they made their new home west of Hallock. There Melba worked for many years at the Kittson County Courthouse as an administrative assistant in the Social Services office. She also continued sharing her librarian skills by volunteering at the local Hallock Public Library. When she was not working, she was busy doing home renovation projects, taking meticulous care of the yard, attending to the details of raising children, caring for her parents, watching after the family pets and taking in a few strays, and always making time for family, including the distant relatives living in Sweden.
Melba enjoyed many home-making aspects of life including cooking, baking, canning, sewing clothes, making quilts, working in the yard, shopping and eventually becoming a grandmother.  Melba was a master at making buns, canning pickles and baking various Swedish Christmas cookies. But her greatest joy was spending time visiting with family and friends. Together they spent countless happy hours sitting around the kitchen table telling stories and enjoying Melba’s delicious baked goods and scrumptious meals.
Melba’s immediate surviving family members include: her two daughters, Erin, who resides in Houston, Texas, with her husband, Scott Haugstad and their two sons Ryan (20) and Kyle (18), and Naomi, who resides in Germany, with her husband, Mark Weltz. Melba was an incredibly caring individual and a loving mother. She is greatly missed by her daughters and many other family and friends.
Melba is preceded in death by: her parents; loving husband Duane; and her siblings, Judy, Ruth, Swede (Walter), Louise and Marvin.
We look forward to a celebration of Melba’s life at the Austin Funeral Chapel in Hallock on Friday, July 24, from 4:30-6:30 p.m. with a time to share memories at 5:30 p.m.
In lieu of flowers, the family prefers donations to Friday Night Live or the Kittson Memorial Nursing Home upper level.