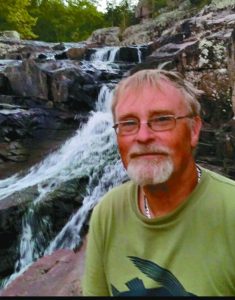 James Percival Halvorson passed away suddenly Dec. 27, 2018, at the age of 61.
James was born to Percival and Eloise (Heden) Halvorson April 3, 1957, in Thief River Falls, Minn.
He was raised in Goodridge, Minn.,  on the family farm that held many great memories for him. After graduating high school, he moved to the Dakotas to become a “trapper,” a job he enjoyed very much. Needing steadier work, he took a job at a grain elevator in Minnesota where he became the manager and worked many years until he was injured. After his injury, he became a butcher/meat caseworker until becoming totally disabled.
James had a passion for fishing, hunting and gardening. He enjoyed ice fishing with his sister, Elaine, and brother-in-law, Rich. He told many stories of hunting trips with Rich, and of  gardening and picking berries with his mother, who he adored. James grew many gardens in his lifetime. He did all the canning at home, his specialty was making bread and butter pickles. He also had a great desire for picking mushrooms. He and Ricky Prewett would have become professional mushroom pickers if time would have allowed.
James’  life really changed when he met and married BonnieJo. He fell totally in love with her and Missouri. It didn’t take long for him to become proud of living in Shannon County. He was exceedingly happy to gain such a loving Christian family. He and Bonnie Jo were rarely apart. They enjoyed many trips to the Alabama shores where James caught stingrays, Pompanos, sharks, flounder and many other fish new to him. They traveled to Minnesota for ice fishing every year and made many memories. The whole family hunted together, with many successful hunts.  James was so proud of his wild hog, huge bucks and turkeys. James and Guyton were avid fishing buddies. They fished for bass, trout, walleye, catfish and best trip ever was spoonbill grabbing including L.J. and Ricky in the trip. He also loved to tease Kristal, Sheena and Brooke. Times together were always filled with laughter and tons of smiles! James was always busy making arrangements for his next journey, which always included BonnieJo, Guyton and Grace by his side.
James’ most cherished thing to do was attend church.  He truly carried the burden for others and never hesitated to help and pray for anyone. He prayed daily for names which he had listed in his Bible. James knew the true love of our Savior. He found peace.
Preceding him in death are his father, Percival Halvorson and mother-in-law, Mary Lee Ferguson.
He leaves to mourn, his mother, Eloise,  of Minnesota; one sister,  Elaine and husband, Rich; two nephews, Steve and Mike, one niece Deb; four great-nieces and nephews, Beau, Kenzie, Luke and Brooklyn; his loving wife, BonnieJo; six step-children, L.J., Sheena, Kristal, Natasha, Guyton and Grace; many grandchildren, great-grandchildren; brother-in-law, Daryle and his wife, Chris; his four-legged lil buddy, Oliver; four children, Christopher, Cynthia, Annaleah and Anndrea from a previous marriage, whom he loved very much and held great memories of them growing up; and many, many brothers and sisters in Christ.
James  was laid to rest in a beautiful handcrafted casket made with love by Kirk Roberts. Susan M. Norris officiated the service. Pallbearers were Red Roberts, Doug Richardson,  Kirk Roberts, Daryl Norris, Gil Voylesand Frankie Teague. The church was filled to capacity with people who loved him. Many stood and testified with stories of how he touched their lives with gestures of kindness.
James took his last boat ride to his final destination on a grizzly boat escorted by many  friends and family. As we gathered together at the graveyard, after a few more words, Sue with a guitar in hand and Sharon Norris,  lead us to all sing, “Running my Last Mile Home.” James ran his last mile home into the arms of Jesus! He was accepted by everyone and truly became a Shannon County boy!
The memories left behind are “PERFECT”!