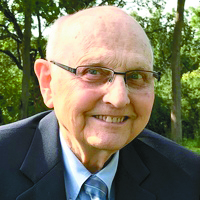 Marlin Don Olson passed from this life into eternity with Jesus on Friday, Aug. 14, 2020, at his home in Apple Valley, Minn., at the age of 81, following a 5½ year battle with cancer.
Marlin was born in Karlstad, Minn., to Reynold and Blanche (Anderson) Olson, joining his older brother Merle. Five years later, and after the loss of Merle, God gave Marlin a sister, Sharon.
After attending Oak Hills Bible College for one year, he transferred to Bemidji State University where he graduated with bachelor’s degrees in physics and mathematics. This led him into his career as a software engineer at Sperry (eventually Unisys) where he worked for 33 years. He ended his career working for Fairview Health Services.
Marlin was drafted into the United States Army June 18, 1963. He served with the 125th Signal Battalion attached to the 25th Infantry in Honolulu, Hawaii. He would speak of his role in setting up radio communication relays near Kolekole Pass and other places in the mountains of Oahu. He served in a time of relative peace between the Korean War and Vietnam conflict. Marlin did, however, experience the sorrow of war in losing his best army buddy and brother in Christ, H.P. Rogers, who was killed in action in Vietnam. He finished his service as sergeant on June 9, 1965.
Seventeen days later, he married his “Sweetheart” Gloria Ann Melby at Karlstad Baptist Church on June 26, 1965. God blessed them with three children: Lenae Beth, JoLynn Kaye and Nathan Don.
God was the priority in his life; as husband, father, grandfather and great-grandfather, Marlin faithfully led his family toward their heavenly Father; as a friend, he cared for others; he continually prayed that all might know the hope he found in Jesus.
Marlin enjoyed vegetable gardening and woodworking. He also enjoyed many recreational sports including many years of church-league softball with Nathan, but none were enjoyed as much as table tennis (and that’s “table tennis” not “ping pong” of course). In retirement, he also delighted in returning to his farming roots to drive tractor for his niece and nephew during harvest.
Marlin was preceded in death by his older brother, Merle, in 1942 and his parents, Blanche and Reynold.
He is survived by his wife, Gloria; children, Lenae (Vaughn) Glasener, JoLynn (Wiley) Scott, and Nathan (Julie) Olson; grandchildren, Alison (Chris) Mason, Abigail (Dan) Blazek, Noah and Luke Glasener, Xavier (Madison) Scott, Keturah (Kevion) Ellis, Jeremiah Scott and Marta and Kalisha Olson; great-grandchildren, Rani, Cohen and Crew Mason, Graham and Ellowyn Blazek; sister, Sharon (Jim) Hilbrand; as well as many other relatives and friends.
Memorial services were held Wednesday, Aug. 26, 2020, 2:30 p.m. at Bethlehem Baptist Church, Lakeville, Minn.