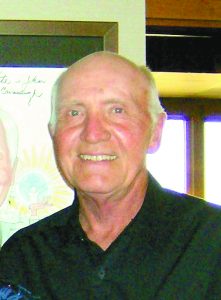 Jeryl Peterson, 69, of Lancaster, Minn., passed away at his home surrounded by family on Thursday, Nov. 12, 2020.
Jeryl Maurice Peterson was born March 10, 1951, in Hallock, Minn., to Maurice and Ann (Sjostrand) Peterson.  He grew up mostly in Richfield, Minn., and graduated from Richfield High School.  After high school he joined the U.S. Army and served two years including a tour in Viet Nam.
Jeryl married Catherine Jeanne Lindstrom on Oct. 5, 1973. Their union was blessed with three daughters.
In 1977, they settled in Rosemount, Minn., where they raised their family and were very active in their community and their daughters’ activities. The friendships and memories they formed with neighbors on recreational teams and at family gatherings will last forever.
After Jeanne passed away, Jeryl moved to Lancaster. Jeryl was a man of many talents who generously shared those talents with family and friends.  He was the first to volunteer when anyone needed help.
Jeryl was a proud veteran and served as Commander of the Savage, Minn., VFW Post #6212. He was also an active member of the Lancaster American Legion.
Jeryl was preceded in death by his wife, Jeanne Peterson; and his father, Maurice Peterson.
He is survived by his special friend, Milly Fletcher; daughters, Laura (Jeff) Mergen, Lu Ann Verduzco (Jeremy L’Allier) and Trinetta (Nate) Gerdes; grandchildren, Ashley, Samantha, Ethan, Macie and Jayse; great-grandchildren, Nolan, Kinsley, Grayson, Hudson, Elias and Ezequiel; his mother, Ann Peterson; siblings, Marcia (Wally) Tyma and Jim (Kate) Peterson and countless family and friends.
A private memorial service was held at Austin Funeral Chapel in Hallock on Sunday, Nov. 15, 2020. Rev. Galen Nordin, presided. Interment will be at Fort Snelling National Cemetery.
In lieu of flowers, please consider memorials to Kittson County Hospice.
Austin Funeral Chapel, Hallock, was in charge of the arrangements. www. austinfuneralchapel.com