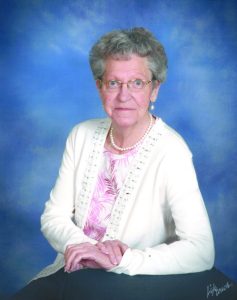 Leona Chalaturnyk, 88, of Lancaster, Minn., passed away at Sanford Hospital in Fargo on Saturday, Nov. 14, 2020.
Leona Olsonawski Masloski Chalaturnyk, the daughter of Joseph and Julia (W) Olsonawski, was born March 16, 1932, in Hill Township of Kittson County, Minn.
She was the third youngest of 15 children.  Leona was baptized and confirmed in the Catholic faith. She attended country school in Hill Township.
On Oct. 5, 1948, she was united in marriage to Louis Masloski. They made their home in St. Joseph Township at the family farm. The Masloski farm was busy all year long.  They cared for many farm animals and milked 20-25 cows. They would carry five gallon milk pails from the barn to the milk barn, which is the reason Leona said she was so short! On Sundays, company would come over and she would cook up three or four chickens for dinner. The adults would play cards and the kids would play outside. Leona loved to embroider dish towels, watch the Minnesota Twins, bake cookies for the great-grandchildren and dance at the Polish Hall. She also enjoyed gardening, playing poker and pinochle.  Louis died on Nov. 22, 1974.
On June 20, 1977, she married Nick Chalaturnyk.
They farmed near Lancaster for many years.  Leona worked many different jobs including, Arctic Cat, the Lancaster Creamery and baking in the local grocery store.  Nick passed away on Jan. 19, 2013. After Nick’s death, Leona moved to The Lancaster Senior Housing, where she currently lived.
There are no words to express her great love of God. If you were to ever stop or call, Leona would be saying the Rosary for all her family and friends. Her great joy was her grandchildren, her parting words to them on the phone or in person was always, “Love You.”
She is survived by: her children, Sharon (Gerry) Prosser, Carrington, N.D., Virginia (John) LeDoux, Lancaster, Jean (Arlen) Lyberg, Lancaster, Marie (Rick) Schmiedeberg, Warren, and Irene Burton, Lancaster; her only surviving sister, Alice Skorczewski; 12 grandchildren, Amanda and Chad Prosser, Renee (Dan) Jaszczak, Laura LeDoux, Chris LeDoux, Shawn (Cheri) Lyberg, Shannon (Jason) Langerud, Tim (Emily) Schmiedeberg, Kellie (Chad) Wehrman, Steven (Tiffany) Sjostrand, Darick (Tricia) Sjostrand and Kayla Thompson; 21 great-grandchildren and many nieces and nephews.
She was preceded in death by: her parents; husbands, Louis and Nick; 12 brothers and sisters; a grandchild and two great-grandchildren.
Private family services will be held on Friday, Nov. 20, 2020, at 11 a.m. with visitation for one hour prior to the service at Holy Rosary Catholic Church, rural Lancaster. Interment will be in Holy Rosary Cemetery. Fr. Maschio, presiding; Deb Olsonoski, organist.
Casket bearers will be Chad Prosser, Tim Schmiedeberg, Chris LeDoux, Steven Sjostrand, Shawn Lyberg and Darick Sjostrand.
Austin Funeral Chapel, Hallock, is in charge of arrangements, www.austinfuneralchapel. com.