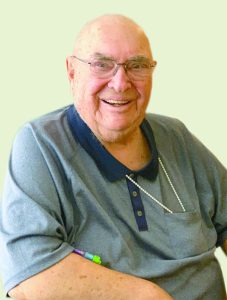 Arlen Erickson, 84, of Kennedy, Minn., passed away at Altru Hospital in Grand Forks on Wed., Dec. 9, 2020. He felt that his family and friends were life’s greatest gifts—and his friends and family feel the same about him.
Arlen was born to Raymond and Mildred (Andeen) Erickson on Aug. 28, 1936. He grew up on the family farm in Skane Township. He was baptized and confirmed at Red River Lutheran Church, a church he dearly loved and attended his whole life.
Arlen married Lois Anderson at East Emmaus Lutheran Church on Sept. 29, 1956. They lived in rural Kennedy, farming and raising their three children Kelly, Tammy and Dawn. Arlen continued to enjoy farming until retirement and beyond, as he watched Kelly and grandson, Scott, take over on the farm.
Arlen was blessed by lifelong friendships up and down the Red River Valley. He was actively involved in the community and served on the boards of many organizations, including Red River Lutheran, Skane Township, Kennedy Farmers’ Elevator, Red River Valley Sugar Beet Growers Association and Drayton Factory District. He was a charter member and past president of the Kennedy chapter of Lions Club International.
After his retirement, Arlen and Lois enjoyed winters in Sun Lakes, Ariz., where he loved meeting old friends and making new ones at morning coffees and afternoon happy hours. Arlen and Lois equally enjoyed their summers at Maple Lake near Mentor, Minn., where Arlen would sit on the back deck catching up with neighbors, talking politics and the Twins, and keeping a watchful, worried lookout as his grandchildren and great-grandchildren played, swam and fished.
His surviving family members include his wife of 64 years, Lois; his children Kelly (Karen) of Hallock, Tammy Costin (Kent) of Moorhead and Dawn Murrell (Jeff) of Tacoma, Wash.; his grandchildren Scott Erickson (Brynn) of Kennedy, Sarah Erickson of St. Paul, Mary Beth Zabel (Andy; daughters, Eleanor and Eliza) of New Hope, Kaley Kaul (Matthew; children Lillian, Abraham and Samuel) of Ottertail, Krista Costin of St. Paul, Karin Holsen (Ben; daughter Kennedy) of Lauderdale, and Jackson and Benjamin Murrell of Tacoma, Wash.; and his niece, Dedra Schendzielos of Minneapolis.
He was preceded in death by: his parents, and his sister, Linda Schendzielos.
A Celebration of Arlen’s life will be held at a later date. Austin Funeral Chapel, Hallock. www. austinfuneralchapel.com.