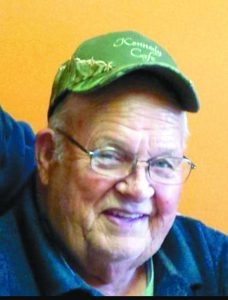 James Olson, 84, New York Mills, Minn., formerly Donaldson, Minn., passed away Friday, Dec. 11, 2020, in Sanford Hospital, Broadway, Fargo, N.D.
James was born May 19, 1936, as a twin, the son of Olaf and Gladys (Lyke) Olson in Donaldson, where he attended school through the eighth grade. He entered the Navy on Jan. 7, 1954, and was honorably discharged on May 14, 1957.
He worked on road construction and that is where he met Doretta Hofmann. They were married Nov. 26, 1960, in Medina, N.D., and just celebrated 60 years together. They made their home in Donaldson until September 2018 when they moved to New York Mills to be closer to their four daughters. James worked many construction jobs throughout Minnesota and the Dakotas. Over the last 20 some years he worked for Simplot, TranSystems and local farmers.
One of his greatest accomplishments was receiving his high school diploma through the veteran’s office and school district 2171 on Nov. 10, 2006.
James will always be remembered for his wonderful bear hugs and his laugh that was truly infectious. He made many friends by being a little precarious. He would always try to pull something on you if you were not paying attention. He was a very picky mower and took excellent care of his lawn. He also loved playing cards with family and friends. If he had your phone number, you could count on a phone call at least once a week. Once you gained him as a friend he would more than likely give you one of his famous “nicknames.”
He is survived by: his wife of 60 years, Doretta; daughters, Lea (Jerry) Oswald, Fergus Falls, Minn., Julie (Gary) Spilde, Perham, Minn., Lorrie (Mark) Lorentz, Moorhead, Minn., and Jami (Mitch) Kolrud, Fargo; Eight grandchildren that were the light of his life, Kassandra, Lukas (Krystal), Markas (Ashley), Alexas (Garrett), Mitchell, Madelyne, Cole and Jake; Three great-grandchildren, Jazmyn, Bekkam and Brooks; Five sisters-in-law and three brothers-in-law as well as several nieces and nephews to whom he was very close.
He was preceded in death by: his parents; father and mother-in-law; five brothers and seven sisters; three brothers-in-law; and two sisters-in-law.
A Celebration of Life and Time of Sharing will be held at St. Olaf Lutheran Church on Saturday, June 5, 2021, at 1:30 p.m. Interment will be in Hillcrest Cemetery, Donaldson. Military honors will be accorded by the Minnesota National Guard.
Austin Funeral Chapel, Hallock, is in charge of arrangements. www.austinfuneralchapel.com.