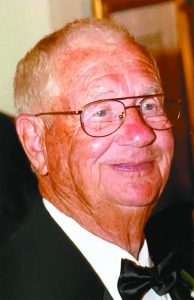 Harlan Tilford Charon, 94, of Walker, Minn., passed away on Dec. 18, 2020, surrounded by his family.
Harlan was born on March 12, 1926, on a farm near Park River, N.D., the third of six children born to Thomas and Hattie Charon. He had an adventurous boyhood and his brothers nicknamed him Buck. After high school, Harlan graduated from the U.S. Naval Air Gunner’s School and was stationed in Oakland, preparing to go overseas when the war ended in 1945.
Harlan married Violet Northagen on Oct. 27, 1946.  They raised a son, Terry, and daughter, Lynda. In 1953, Harlan began his 38-year career with Otter Tail Power Company. They lived in Langdon, Devils Lake, Hallock, Rugby and returning to Hallock where he retired as Division Manager in 1991. He was an active member of the Lutheran Church wherever they lived.
He enjoyed square dancing with his wife and snowmobiling with family and friends. He was also a member of Lions Clubs, Kiwanis, served on the Hallock City Council 1979-86 and was Hallock Mayor 1987-92.
Harlan loved sunshine and water. He was an honorary member of the Devils Lake Aquanauts in the 60s.  A small boat would pull him riding on a chair placed on a disk reading the newspaper, comically interrupting the ski shows.
He enjoyed many days basking in the sun, swimming and skiing at his son’s lake home. He made an annual trip to Bozeman, Mont., to visit family and get his fill of horses, cats, dogs and hot springs. At the age of 65, he became certified to scuba dive. In 1995, he and Violet started 20 years of wintering in Mesa, Ariz., where he was frequently found in the pool. Most of all, Harlan loved his roles as husband, brother, dad, uncle, grandpa and great-grandpa. He loved his bride of 70 years to the end.
He is survived by: his son, Terry (Corrine), Cass Lake, Minn.; daughter, Lynda (Jim) Brown, Bozeman, Mont.;  Grandchildren: Ryan (Tara), Carly (Donnie), Elliot (Corey), Travis (Deb), Zach (Alice); Great-Grandchildren: Owen, Ava, Lucy, Piper, Violet, Grayson, Parker, Abby and Vera; Sisters-in-law Lorraine Northagen and Kathy Northagen; and brother-in-law, Lloyd Northagen.
Harlan was preceded in death by: his parents; siblings, Delphine, James, Vernon, Franklin and Marion; and wife, Violet.
Cremation has taken place and a memorial and interment will take place next summer, date to be determined.
Condolences may be left at ceasefuneralhome.com.