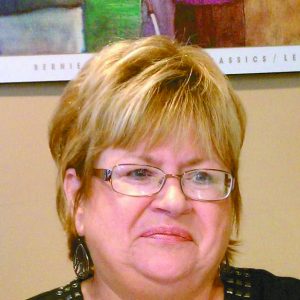 A memorial service for Mary JoAnne Visness of Baudette, Minn., will be held on Saturday, May 29, 2021, at 11 a.m. at Wabanica Lutheran Church in Baudette. Visitation will be held one-half hour prior to the service at the church.
Mary JoAnne (Thibodo) Visness, 73, of Baudette, passed away on Feb. 20, 2021, at Mercy Gilbert Medical Center Gilbert, Ariz.
Mary was born on Aug. 17, 1947, in Warren, Minn., to Ralph and Waltra Thibodo.
She graduated from Stephen High School in 1965. She married Kent Visness on Oct. 11, 1969. They raised two children, Traci JoAnne and Joel Kent. Her last job was working at the VA Medical Center. She was forced to early retirement in 2003 after a long hospitalization with ARDS that resulted in many health issues. She lived a long and impressive 18 years after surviving ARDS.
Mary was a beloved wife, mother, daughter, sister, grandmother, aunt, niece and cousin. She loved to be with her family and friends. She loved to sew, crochet, shop, bake, cook and play cards. Everything was much more difficult for her after ARDS in 2003 and cancer in 2008.
Mary was a member of the Baudette Lutheran Parish, ELCA.
Mary is survived by: her husband, Kent Visness of Baudette; her children, Traci (Thomas) Sanneman of Woodbury, Minn., Joel (Lynne) Visness of Monticello, Minn.; eight grandchildren, Wesley, Lincoln, Kennedy and Felicity Sanneman, Tristan, Raena, Tyson and Aria Visness; siblings, Mike (Pris) Thibodo and Tom Thibodo.
She is preceded in death by: her parents, Ralph and Waltra (Wosick) Thibodo.