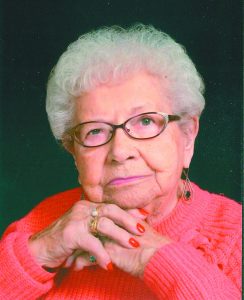 Lorna Jensen of Stephen, Minn., age 101, passed away on Monday, Feb 15, 2021, at Northstar Manor in Warren, Minn., while under Hospice care.
Lorna Johanna Conner was born March 29, 1919, at her grandparents’ farm in Oak Park Township, Minn. She was the third of five daughters born to Elbert and Mabel (Hammerlund) Conner. When Lorna was just a little girl, Elbert died in 1926 following a work-related accident; subsequently Mabel and her five daughters moved to Alvarado, Minn., to be near Mabel’s family. The young girls helped out by doing odd jobs such as laundry, housekeeping and working the sugarbeet fields. Lorna knew how to work a sugarbeet knife and said she could hook and top in one swipe, a skill she perfected during those years of hand harvesting sugarbeets. She graduated Teachers’ College in Warren and was hired to a one-room country schoolhouse northeast of Stephen.
At St. Petri Church in rural Stephen she met Alfred Jensen. World War II put a pause to their courtship with Alfred in the Army, serving in France and Germany. On the homefront, Lorna moved to Minneapolis to work on the production lines at Honeywell, and then to Renton, Wash., at the Boeing airplane factory. They were reunited at Stephen after the war and married on March 28, 1946.
The couple welcomed three children, Judy, John and Mary. Lorna and Alfred farmed at “Happy Corner” east of Stephen, raising small grains and sugarbeets. Many of the neighborhood kids who grew up at “Happy Corner” traveled home to attend Lorna’s 100th birthday party in 2019.
Lorna and Alfred wintered in Bullhead City, Ariz., and enjoyed summertime at Springsteel Island on Lake of the Woods. They traveled to Europe and across the U.S. visiting friends and family. She also spent winters in Portland, Ore., where her daughters and grandchildren lived.
Alfred passed in 1996 and Lorna kept busy with her six grandchildren and 14 great-grandchildren. Hugs for grandma were a necessity and she never missed the opportunity to hold a new grandchild. She traveled with her niece Marilyn Jones of Texas, often visiting cousins and friends.
Before moving to the Tamarac Assisted Living, Lorna enjoyed walking to the nearby Stephen Community Center for morning coffee with friends and participating in the exercise classes. She attended church at First Lutheran and sat in “her pew” where she was surrounded by a special group of ladies. After services, they sat together at “their table” for coffee and fellowship. This past year, coming full circle, she was able to worship once again at the well-preserved altar of St. Petri Lutheran church, which has been relocated to the Tamarac chapel, and where First Lutheran online services are viewed.
Lorna will be remembered for her poise and grace, and a little bit of fun. Summer weekends at the lake with four generations of her family, shopping and casino road trips with Nona and other friends, and 4 p.m. happy hours were some of her favorite pasttimes. She loved her neighbors at the Jensen Apartments, and then at the Tamarac Senior Living. She always had an open door for visitors and lived her life fully up until her final accidental tumble.
Lorna is survived by: her three children, Judy Bennett, John (Betty Pikop) Jensen, and Mary Marten; six grandchildren, Becky (Tim) Panos, Rachel Bennett, Sarah (David) Nicholson, Brian (Betsy) Jensen, Derrick Jensen, Angela (Nathan) Smith; and 14 great-grandchildren, Stavros, Lula and Chloe Panos, Bennett, Charlie and Michael Nicholson; Conner, Holly and Carrie Jensen; Jevin Jensen; Isabelle, Lucy, Beau and Penelope Smith.
Lorna was preceded in death by: her husband, Alfred; son-in-law, Scott Bennett; daughter-in-law, Jane Jensen; and her four sisters, Mildred, Hazel, Junita and Margie.
She was just weeks away from her 102nd birthday.
Special thanks to the wonderful caregivers at Tamarac Senior Living, Stephen Volunteer Ambulance, North Valley Health Care Center and North Star Manor, Hospice of the Red River Valley and Austin Funeral Chapel. The care and kindnesses shown to Lorna and her family were so very much appreciated.
Lorna’s life will be celebrated at her Memorial Services on Saturday, June 12, 2021, at 10:30 a.m., followed immediately by lunch and fellowship at the Stephen American Legion, with interment later that day at St. Petri Cemetery. A video will be available to view on the First Lutheran link. Memorials are preferred to First Lutheran Church in Stephen and the St. Petri Cemetery Fund.
Austin Funeral Chapel, Stephen, is in charge of the arrangements. www.austinfuneralchapel.com.