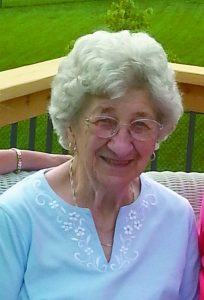 Mavis Florence Hoenke, 96, of Hallock, Minn., passed away on June 6, 2021, at Kittson Memorial Healthcare Center.
She was born on Jan. 26, 1925, in Warroad, Minn., to Andrew and Sophia Olson, the 11th of 13 children.
Mavis was baptized, confirmed and married at Zion Lutheran Church in Warroad. She was married to Calvin E. Hoenke on June 19, 1948. Calvin was a partner with Andy Larson at the Larson/Hoenke Funeral Home in Hallock. Sadly, he passed away from colon cancer on March 7, 1966.
Following her high school graduation in 1943, Mavis wanted to join the Women’s Army Corp (WAC) as a nurse in World War II. Because her seven brothers were in the war, her mother did not allow that. She worked as a nurse’s aide at Warroad Hospital and then moved to Hallock where she worked at Kittson Memorial Hospital. Mavis took training to be an LPN and worked at Kittson Memorial a total of 47 years before retiring at the age of 74 in June 1999.
When she moved to Hallock, Mavis became a member of Grace Lutheran Church and was the first woman to be elected to its church council. She gathered a team of members to make the first chirsmons for the Christmas tree. She coordinated and served many meals at Grace Lutheran and was involved in the women’s group (WELCA) and Bible studies.
As a young adult, Mavis was a member of a homemaker’s group, held several offices in Eastern Star, was an actor in community plays, played golf and was a member of the curling team in Hallock. Mavis was an expert seamstress (making her own and her daughters’ wedding dresses) and a skilled knitter (including Norwegian sweaters for children and grandchildren). Mavis continued knitting prayer shawls through her 90s. She was a caterer for many years with Aileen Olson and Verna Lyberg serving weddings, graduations, all-school reunions, community events and a Christmas dinner for Senior Citizens. Proud of her Norwegian parents and heritage, Mavis fulfilled a goal of visiting Norway.
Mavis is survived by: daughters, Shauna (Dirk) Kleinheksel, Watertown, Minn., and Pernelle (Edward) DeVore, Friedens, Pa.; grandchildren, Heidi (Steve) Fuchs, Andrea (Genia) Stevens, Scott Kleinheksel, Per (fiancée, Jacklyn Morgan) DeVore, and Britta (partner, Sarah Beauhamp) DeVore; great-grandchildren, Emily and Kimberly Fuchs; a sister-in-law, Connie Olson; and numerous nieces and nephews.
Mavis was preceded in death by: her parents; brothers, Albert, Edwin, Melvin, Helmer, Lyle, Lawrence and Leslie; and sisters, Clara Bolton, Alvilda Caulk, Doris Runger, Alyce Mattson and Helen Sandstrom.
A Celebration of Mavis’ life was held on Tuesday, July 13, 2021, at 11 a.m. in Grace Lutheran Church. Marilyn Grandstrand SAM and Rev. Edward DeVore will officiate. Visitation was held at the church for one hour prior to the service. Interment will be in Ft. Snelling National Cemetery beside her husband, Calvin Hoenke. In lieu of flowers, memorials may be made to the Hallock Senior Center or Grace Lutheran Church.
Austin Funeral Chapel, Hallock, is in charge of the arrangements. www.austinfuneralchapel.com.