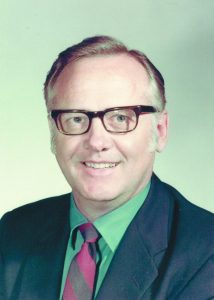 Grant Emanuel Peterson passed away in his sleep Friday, June 18, 2021, in the Belle Plaine Lutheran Home, Belle Plaine, Minn. He was 94.
Grant was born June 1, 1927, in Hallock, Minn., and raised on a farm outside Kennedy, Minn. He was the last living child of Gunnard and Hilda Peterson.
A small, family-only funeral service was held at Red River Lutheran Church in rural Kennedy on Friday, June 25, 2021, followed by a military honors service and burial at Fort Snelling on Monday, June 28.
Grant was baptized and confirmed at Red River Lutheran Church in Kittson County. He fondly recalled times of helping his mother play the church organ by pumping the bellows on Sunday mornings. Grant’s education included attending a one-room schoolhouse as the only child in his grade for 8 years, after which he went on to Northwest School of Agricultural in Crookston, Minn., where he was active in choir and sports (he was a captain of the football team), graduating in 1945.
Grant attended Gustavus Adolphus College in 1951, and graduated with a major in business administration. It was there he met his future wife, the former Bernice Johnson, who worked as a student nurse in the student health center. A running joke was that Grant came up with “ailments” so he would have a reason to go to the health center to see Bernice. They were wed on April 13, 1953, and married for 61 years until Bernice’s passing in 2014. Prior to their marriage, Grant served in Korea for 18 months as an army corporal assigned to administrative detail while stationed in Seoul.
Soon after their wedding in Moose Lake, Minn., Grant and Bernice headed west to Salt Lake City, Utah. From researching various communities in the West, they had concluded it would be a good place to live. However, less than two years of Utah living sent them back to Minnesota to settle in Adams, where Grant took a teaching position at Adams High School and Bernice worked as a nurse in Austin, Minn. The couple had three children, Christie, Ann and Scott.
In Adams, Grant soon became principal of Adams High School (Southland) and earned the first of his two master’s degrees in education administration at the University of Minnesota, Minneapolis; he later earned a master’s at Mankato State University in library science.
Grant’s Christian faith led his life. He had a saving relationship with his Lord and Savior Jesus Christ. Grant served in church choirs and held many leadership positions at various churches, including St. Olaf Lutheran Church in Austin. His children have been forever grateful for their nightly family devotions spent learning the ways of God and His saving grace.
After moving to Austin in 1970, Grant left the principal field and ran the school library media center and coached speech at Southland. He retired in 1987, and the Peterson couple took many vacations. In 2000, he and Bernice moved to Mankato where they continued to enjoy their retired years.
Grant was an avid gardener and outdoorsman with many hobbies. He painted nature scenes, carved wooden animals and objects, hunted, fished, and played guitar and piano. Vacations “up north” to visit family were yearly highlights. He was well-known in family circles for delicious rye bread and caramel rolls baked from scratch. Grant’s Saturday morning pancakes, eggs and bacon were a weekly treat for all, as were his BBQ suppers. Playing with his kids was a favorite past-time, hitting countless baseballs, throwing football passes, smashing ping-pong balls, playing Scrabble and Domino games, hooking golf balls and pocketing billiard balls. After a day of work, food and activities, Grant could be found in his favorite Lazy-Boy recliner holding a guitar on his lap, singing, “What a Friend We Have in Jesus.”
He is survived by: children, Christie (Ron) Jones of Chaska, Minn., Ann (David) Dutze of McKinney, Texas, and Scott (Stephanie) Peterson of Stanchfield, Minn.; nieces and nephews, Duane Peterson, Donna Kotchman, Rikki Peterson, Larry Peterson, Elizabeth Fagerberg, Virginia Johnson, Timothy Olson, Beverly Hapner, Patricia McBride, Loel Ray Olson, Kirsten Olson, Robyn Johnson, Steve Johnson, Chris Johnson, Kerry Johnson, Greg Johnson, Katherine Christoferson, Barbara Meiss and Robert Mohelski; 10 grandchildren; three great-grandchildren; and many great-grandnieces and great-grandnephews.
Grant was preceded in death by: his wife, Bernice; father, Gunnard; mother, Hilda; brothers, Winslow (Emma), Lloyd (Doris and their daughter Kathy), Lowell, and sister Marjorie (Raymond Olson).
Funeral services provided by Mankato Mortuary. If so inclined, any memorials may be directed “In Memory” of Grant to the charity of your choice.