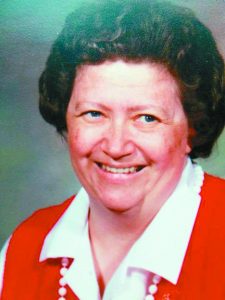 Rosalie Christine Jaszczak, 81, passed away on Thursday, June 24, 2021, at the Fairview Ridges Hospital in Burnsville, Minn.
She was born in Hallock, Minn., on Sept. 16, 1940. She was raised in Orleans, Minn., attended Lancaster Public School, and graduated in 1959. Rosalie devoted her life taking care of others. Her first job was as a nanny for a family in Minneapolis. Later, Rosalie moved to Tolstoi, Man., where she took care of Fr. Mandeka for about 22 years. She continued to care for the elderly in northern North Dakota around the Walhalla and Grand Forks areas before moving to Apple Valley, Minn. For the past several years, she made her home at the Apple Valley Villa assisted living center in Apple Valley.
If Rosalie was not giving her time volunteering to help others whenever possible, she was busy crocheting gifts for others. Rosalie was famous for her homemade cards. She loved to make her own cards because she got to say what she wanted to say. Rosalie also enjoyed playing cards, working on puzzles, making jewelry, coloring and cats.
One of Rosalie’s favorite memories was her road trip with her sister, Angie. They stopped at many sites such as Mount Rushmore, Buffalo Bill’s Museum and visited their cousin in Colorado.
Rosalie always had a warm presence to her and will always be remembered for her cheerful smile, friendly personality and strong faith.
She is survived by: brothers, Joseph and wife Catharine of Apple Valley, and Leo, of Farmington, Minn.; sister, Angie Gibson, of Farmington; sisters-in-law, Marilyn (wife of Casmier), of Las Vegas, Nev., Linda Scorsone (wife of John), of North Platte, Neb.; and several nieces, nephews and cousins.
She was preceded in death by: her parents, Theresa and Charles Jaszczak; three brothers, John, Peter and Casmier.
Funeral services are scheduled for Friday July 16, 2021, at 11:30 a.m. at the Holy Rosary Catholic Church, rural Lancaster. Interment will be in the church cemetery. Fr. Maschio Mascarenghas, presiding; Sharlene Klegstad, organist. Visitation will be held at the church for one hour prior to the service on Friday. Austin Funeral Chapel, Hallock. www.au-stinfuneralchapel.com.