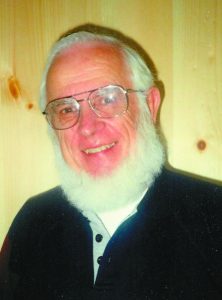 Walter David Christman, 91, of Park Rapids, Minn., died Saturday, Sept. 4, 2021 at Colleen’s Caring Hands in Bemidji, Minn.
Private services will be held. Arrangements are with the Cease Family Funeral Home of Bemidji.
Dave was born in La Crosse, Wis., in 1930, son of Walter and Freeda (Crane) Christman.
At a young age, his family moved to Pueblo, Colo., where he graduated from high school in 1948. He married the love of his life, Nancy Ellen Smith, in 1953. Dave found his calling when he decided to enter the Seminary in 1964. He graduated from Dubuque Theological Seminary in 1968. He was a minister in the Presbyterian Church, doing work in both Kansas and Iowa prior to spending 11 years in Hallock, Minn. He was a member of the Hallock Lions, served on various boards of the Presbyterian Northern Plains, the Hospice board in Hallock, the Park Rapids Food Shelf, Kittson County Board of DAC, and the Kittson County Hospital Board. He retired from the Presbyterian Church in 1995.
He enjoyed reading, wood crafts, carpentry, collecting Santas, bookends, Eskimo art and loved his peanut butter! He had a true passion for people and spent most of his life touching the lives of those he encountered.
He is survived by: his granddaughter, Megan Heuer of Bemidji; and his son-in-law, Chris Tennant, Park Rapids; and four great-grandchildren.
He was preceded in death by: his parents; his wife, Nancy; his daughter, Deb Tennant; and his son, Roy Christman.
Condolences may be left at ceasefuneralhome.com.