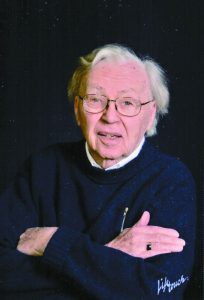 Norman J. Ellingson, 86, of Crookston, Minn., passed away at his home Tuesday evening, Sept. 21, 2021, surrounded by the love and comfort of his family.
Norman was born on Oct. 21, 1934, in Breckenridge, Minn., the son of Olaf W. and Helen W. (Nord) Ellingson. At a young age, Norman helped at his father’s car dealership, Valley Sales Company, and on the family farm. He graduated from Breckenridge High School in 1952. Forever a farmer at heart, some years later Norman and his brother farmed as Ellingson Brothers. As a first-generation college student, Concordia College was selected for him by his father and his minister, and he started in the fall of 1952. It was his love of music, combined with playing first chair clarinet and serving as president of the Concordia Concert Band, that he credits for completing his four years of college. Norman graduated in 1956 with a bachelor’s degree in history.
It was at Concordia that he met his first wife, Donna Maristuen. They married in June of 1956 and made their way to Colstrip, Mont., where Norman “taught 7th and 8th grade everything” and became deeply involved in the school and community, starting Colstrip’s first school band, driving bus, running the projector for the town’s movie night, and being a first responder for the local ambulance crew.
During 1958, Norman and Donna moved closer to home, where he began teaching at Central High School (CHS) in Crookston. With the encouragement from his superintendent, Norman’s career path led him to guidance counseling. He worked as the junior high guidance counselor from 1963-1966, after which he transitioned to high school, where he remained for the rest of his 34-year career.
Following the early passing of Donna, Norman was blessed to meet Amy Johnson, an English teacher at CHS from Humboldt, Minn. Their rural roots, deep and abiding faith, and love of education made them a great match. Their marriage on June 24, 1971, began a life together dedicated to faith and family.
Norman has been deeply involved in his community during his professional life and well into his retirement years. He served as president of the Western Division of the Minnesota Education Association and on the board of the Lake Agassiz Regional Library. He was a member of the Order of Eastern Star #137, Masonic Lodge AF & AM #141, and the Elks. The community recognized his involvement on three different occasions with the Experienced American Award, the Outstanding Community Builder Award, and induction into the Crookston High School Hall of Fame. Norman felt privileged to have spent so many years teaching and learning with the young people of the Crookston community.
Music remained a common thread throughout Norman’s life. He directed the choir at Trinity Lutheran Church for 10 years, played clarinet in the Ninth District Legion Band for 59 years, and still played piano and sang when the mood prompted him. Forever an avid reader, his favorite subjects were religion and history.
Norman’s greatest joy has always come from his family. When thinking of Norman, his children and grandchildren reflect on his deep faith, his love for his family, his moral compass, a strong connection to music and service, and his pride in his Norwegian heritage.
Norman is lovingly survived by: Amy, his beloved wife of 50 years; four children: Margaret (Peter) Mellbom of Longview, Texas, Michael (Karen) Ellingson of Minneapolis, Minn., Erik (Mary) Ellingson of Minot, N.D., and Hussein Hammoud of Breckenridge; 8 grandchildren: Nicole (Chris) Loehr, Caleb (Leesa) Mellbom, Kirsten (Ryan) Siegle, Amos Mellbom, Molly (Cameron) Long, Reid (Macie) Ellingson, Angus Ellingson, and Elizabeth Ellingson; seven great-grandchildren: Jace Loehr, Moses, Josiah, and Rosemary Mellbom, Owen and Elin Siegle, and Maxine Long; two sisters, Wanda (Lyle) Dahl of Detroit Lakes, Minn., and Sonja (Dale) Thimjon of Moorhead, Minn.; sisters-in-law, Jane Ellingson of Breckenridge and Lois Peterson of Northwood, N.D.; brothers-in-law, Gary Johnson of Humboldt, Minn., and Dennis (Barb) Maristuen of Northwood; and several nieces, nephews, extended family and friends.
Norman was preceded in death by: his first wife, Donna Ellingson; his parents, Olaf and Helen Ellingson; and brother, John Ellingson; Donna’s parents, Milton and Mia Maristuen; and brother-in-law, Don Peterson; and Amy’s parents, William and Amey Johnson; and sister-in-law, Julie Johnson.
All are welcome to a visitation with Norman Ellingson’s family from 5-7 p.m. Tuesday, Sept. 28, 2021, in the Trinity Lutheran Church in Crookston. There will be no prayer service following the visitation. A private family memorial service will be recorded and may be viewed after Thursday, Sept. 30. A graveside service will be held at the Greenwood Cemetery in Hallock, Minn., with Pastor Gary Johnson officiating. Memorials may be given in Norman’s memory to the Norman J. and Amy D. Ellingson Endowed Scholarship established at Concordia College, Moorhead, to support students committed to faith, community, education and service.
Online registry and messages of condolence may be made at www.stenshoelhouske.com. To view the memorial service, log onto www.stenshoelhouske.com, go to the bottom of Norman’s obituary page, and click on the prompt to view.