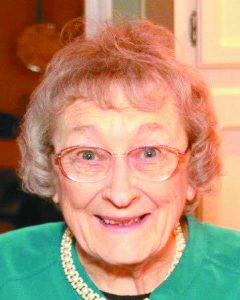 Dorothy M. Swan, 87, died July 28, 2020, at Mercy-Unity Hospital, Fridley, Minn., being in declining health for a few years.
Dorothy Margaret Berard was born Feb. 10, 1933, in rural St. Vincent, Minn., to Albert Louis (1905-1985) and Wilhelmina “Billie” Marian Gamble (1908-1982) Berard. The youngest of three, she was raised in the Hallock area by Billie and Ed Johnson, and attended Hallock schools through graduation in 1951. While still in high school, she began working for Clifford Bouvette at the Kittson County Enterprise doing many office and printing tasks, and continued until her marriage.
Dorothy married Walton Swan on June 15, 1954, in St. John’s Episcopal Church, where she had been baptized. She joined Grace Lutheran Church in 1959, where she was a Sunday school teacher for about two decades. She also was a member of the area Homemaker’s Club and helped with the Red River 4-H Club in addition to being a farm wife and mother of two.
In the late 1960s, she began working at Hallock High School and retired during the consolidation to Kittson Central in 1994 and was adviser to the yearbook for some years.
After retirement, she helped out with Senior Meals for a time, and spent winters in Elk River with her daughter, staying full time in recent years. She enjoyed bird watching, reading and crossword and jigsaw puzzles throughout her life.
Left to mourn her are son, Alden (Jo) Swan, Keizer, Ore., and Betty Swan, Elk River, Minn.; grandchildren, Elliot (Brianna), Isaiah and Elizabeth; and two great-grandchildren; nieces and nephews; along with former co-workers and friends.
She was predeceased by her parents; husband, Walton (1923-1981); sister, Jean Bergh (1927-2008); brother, Bill Berard (1928-2006); brothers- and sisters-in law; nephews; and infant grandson.
Interment and graveside service will be held Friday, Oct. 15 at 1 p.m. Greenwood Cemetery.
Austin Funeral Chapel, Hallock, is in charge of the arrangements. www.austinfuneralchapel.com