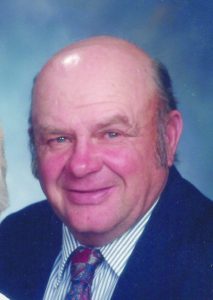 Virgil Lindstrom, 86, of Lake Bronson, Minn., passed away Nov. 14, 2021, at Kittson Memorial Nursing Home, after a short battle with cancer.
Virgil was born in Percy Township on Feb. 10, 1935, to Oscar and Christine (Nordling) Lindstrom, in a family of 10 siblings. He attended school in Lake Bronson and received his GED diploma while in the Army.
He joined the U.S. Army in February 1954, and was stationed in Fort Leonard Wood and Okinawa, Japan. After his discharge in February 1956, he worked at Maytag Aviation at Wold Chamberlain Field in Minneapolis. He attended Dunwoody Institute for watch repair and went to work at Wilbrecht Electronics from 1959 to 1972.
On Sept. 24, 1960, he married Marie Weleski in Lake Bronson. They lived in Minneapolis until March 1972, when they moved to a Lake Bronson farm purchased from Joel Hemmingson. They raised two children on this farm. Virgil enjoyed farming, especially haying time, and raised cattle and small grains. In 1986, he retired from farming and worked for Edward Ekdahl on the farm. In 1993, he started working for MCI in Pembina, retiring in 2000.
Virgil served on the Farmers Union Board, Percy Township board, and Zion Lutheran Church board. He was also a member of the Lake Bronson American Legion. In later years he loved to restore old tractors and stationary engines, which he showed at many parades. He also enjoyed ice fishing on Lake Bronson and snowmobiling with friends. He enjoyed time with his grandsons, especially showing them how to drive a tractor.
He is survived by: his wife, Marie of 61 years; son, Brent (Connie) Lindstrom; daughter, Leanna Sandahl; grandsons, Tanner Lindstrom, Tyler Lindstrom and Carl Sandahl, Jr.; sister, Hazel Aslakson (100 years old); brothers, Lawrence and Frederic Lindstrom; brother-in-law, Willis Johnson; and many nieces and nephews.
He was preceded in death by: his parents; brothers, Gordon and Luverne Lindstrom; sisters, Evelyn Lindstrom, Ethel Sorenson, Elizabeth Johnson, Mildred Gardner; brothers-in-law, Marvin Sorenson, Kenneth Gardner and Leonard Aslakson; sister-in-law, Lillian Lindstrom; and son-in-law Carl Sandahl.
Funeral services were held Saturday, Nov. 20 at 2 p.m. at Zion Lutheran Church, Lake Bronson, Kathy Levenhagen presiding, with Kathy Englund as organist and Everett Englund as soloist. Interment will be at Riverside Cemetery, Lake Bronson. Visitation will be held at the church one hour prior to the service. Military honors will be accorded by Halma-Lake Bronson American Legion. Pallbearers will be Tanner Lindstrom, Tyler Lindstrom, Carl Sandahl, Jr., Cory Gardner, Bruce Weleski and Ron Nash.
The family requests masks to be worn at the service.
Austin Funeral Chapel, Hallock, is in charge of arrangements (www.austinfuneralchapel.com).