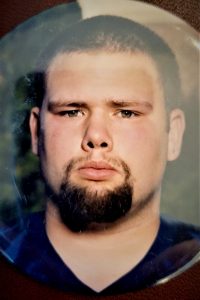 Joshua Aaron Blomquist was born on Nov. 11, 1978, to Bruce and Judy Blomquist of Lake Bronson, Minn.
Josh was called home on Jan. 14, 2022, his heart giving away in his sleep. He was the third of four children.
Josh went to school at Tri-County School in Karlstad, Minn., graduating in 1997. Over his school years, he played football, raced in track and cross country as well as stage help for some of the one-act plays. He also played football in college at Northland Community and Technical College in Thief River Falls, Minn., where he took up mechanics. After college, he went to work at Polaris in Roseau, Minn., for approximately 20 years. Over those years, he worked on the line welding and later years as a mechanic refitting and repairing ATVs and such for special rides and shows.
When given the opportunity, he loved testing snowmobiles and ATVs, which gave him the chance to do some traveling, mainly to Arizona and West Virginia, passing through many other states along the way. He loved racing snowmobiles and was able to complete one of his goals of going the whole way from Winnepeg to Bemidji for the I-500 in about 2017. He didn’t care in what position he crossed the finish line, just that he finished.
Josh was a member of the Jupiter Busy Bees 4-H club throughout his school years, winning many trips to the state fair. The year he graduated from high school, he even came home the night before records were due after college football practice. When asked why he was home so late in the day, his response was that he knew his mom’s rules of always seeing things to the end. As a mom, I was so proud of him for that.
Josh could work hard when he worked, however loved to spend time on the lake with his pontoon. He didn’t care if his was old and not very fancy looking, he just enjoyed the peace and quiet to help unwind.
Josh was very involved in many community and surrounding activities. He was a member of the Two Rivers Sportsmen Club, which helped to spur on his love and strong belief in teaching kids to be safe as a certified instructor through the DNR, with gun safety (fairly newly certified as an instructor), ATV (18 years) and snowmobile (six years). He also served as a board member for the Kittson County Fair Board for eight years plus 14 years prior to that unofficially at his mom’s side. He was a member of Halma-Lake Bronson Sons of American Legion for 21 years. He served on many Memorial Day Honor guards and took part in the Legion’s roofing project. Josh was a firefighter with the Lake Bronson Fire Department for 22 ½ years and was an assistant chief for the past few, which he took very seriously. He was always ready to go the extra mile to help promote our fire department.
Josh often put off his own projects at home to help someone else. As a result of this, he leaves behind a lot of unfinished projects. He loved working on vehicles, tractors, ATVs, snowmobiles and many other miscellaneous projects for family and friends, usually for little to nothing.
He leaves his parents, Bruce and Judy; brother, Jason (Heather); and sister, Karissa; nephews, Trinity, Zachary and Aidan; nieces, Katelyn, Aurora, Ashton and Avalon; grand-nephews, Damian and Christian; grand-nieces Destiny and Caprice; He also leaves behind many aunts, uncles, cousins and many great friends.
Josh was preceded in death by: his grandparents, Edwin and Mary Blomquist, Dale and Clarice Olson; sister, Kelly Marie; and aunt, Karen Johnson.
Josh will be greatly missed by all who got the chance to know him for his commitment to help others whenever he could. Josh was often seen as a very quiet and private guy and yet was very friendly, kind and giving. In someone’s words, “a gentle giant with a giant heart!”
Pallbearers are all Josh’s nieces: Katelyn Mock, Aurora, Ashton and Avalon Hesby; nephews: Trinity Clark, Zachary Clark-Solom and Aidan Hesby; grand-nieces: Destiny Olson and Caprice Garcia; grand-nephews: Damian Solom and Christian Garcia.
Honorary Pallbearers are the members of Lake Bronson Fire Department, Two Rivers Sportsman Club, co-workers at Polaris along with all other family and friends.
Funeral services are scheduled for Friday, Jan. 21, 2022 at 2 p.m. in Zion Lutheran Church, Lake Bronson. Pastor Kathy Levenhagen, presiding. Visitation will be held for one hour prior to the service. Interment will be held at a later date.
Austin Funeral Chapel, Hallock, is in charge of the arrangements. www. austinfuneralchapel.com.