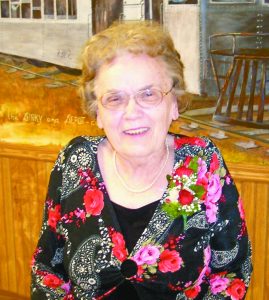 Audrey Ash, 93, of Hallock, Minn., passed away at the Kittson Memorial Healthcare Center early Friday morning, Jan. 28, 2022. She had lived there for two years after breaking her shoulder in a fall.
Audrey Marilyn Joyner was born June 2, 1928, in Ladysmith, Wis. She was the only child of Sheldon and Laurel (Preston) Joyner. Her father worked for the Soo Line railroad and held station agent jobs across Wisconsin, Minnesota and North Dakota, often living on the second floor of the depot. Audrey moved 18 times in her first 18 years, her cats were always a source of companionship and were a lifelong love. She ended up graduating from high school in Stevens Point, Wis., in 1946.
In 1946, the family moved to St. Vincent, Minn. Audrey attended Aakers Business College in Grand Forks, N.D., then was employed at the U.S. Customs in Pembina, N.D., from 1947-1954. It was while singing in the choir at the Pioneer Methodist Church in Pembina that she met a tall, lanky farmer from St. Vincent, William Herman Ash. They were married on Jan. 12, 1952. The first son, William, was born in 1952, followed by Steven in 1954. Farming and more children were suspended when William, who neglected to update his status with the draft board, was inducted into the Army in 1954. After basic training at Fort Leonard Wood, Mo., he was shipped to Austria to work in the motor pool. Audrey joined him there with two toddlers in tow. After a memorable two-year hitch, they returned home and purchased a home and farm in St. Vincent Township. Darryl was born in 1957 and Mark in 1960. William H. died Dec. 6, 1998.
Audrey was a fully engaged farm wife and mother. In a single day, she might wash clothes early, deliver mail as the substitute rural carrier, work in the field, give a haircut and make dinner for six. She was a great cook and baker (her donuts and blueberry kiffles were sought out at bake sales), made clothes and rugs, was the church organist for over 40 years, a Sunday school teacher, was on the PTA, the Eastern Star and a 4-H leader. All that and much more done with a smile and a giggle.
She is survived by: her sons, William of St. Vincent, Steven of Pembina, Darryl (Candy) of Rochester, Minn., and Mark (Kim) of Lewes, Del.; grandchildren, Matthew (Sheila) of Bozeman, Mont., Gregory of Edina, Minn., and Angela (Mike Burkhardsmeier) of Grand Forks; great-grandchildren, Madison and Evan Ash of Bozeman.
Audrey was preceded in death by: her husband, parents and daughter-in-law, Joy (Johnson) Ash.
A funeral service for Audrey is planned for Saturday, June 11, 2022, at 11 a.m. in the Humboldt United Methodist Church. Interment will be in St. Vincent Cemetery.
Austin Funeral Chapel, Hallock, is in charge of arrangements. www.austinfuneralchapel.com.