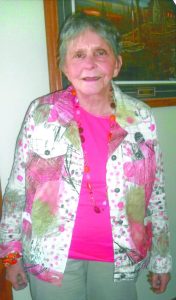 Shirley Jean Bronson, 87, of Lake Bronson, Minn., died peacefully on Jan. 29, 2022, at the Karlstad Healthcare Center.
Shirley was born in Unorganized Township of Kittson County, Minn., the fourth of five children born to Maude (Flint) and Nordy Jacobson on June 18, 1934.
Shirley grew up and attended school in Lake Bronson. On July 12, 1950, Shirley married Glen Bronson at Lake Bronson Union Church. They made their home in Lake Bronson where she raised their three young children. In 1965, the family moved to Chula Vista, Calif., where Shirley completed school and received her diploma from Chula Vista Adult School. In 1966, the family moved to Spring Lake Park, Minnesota where she worked for Honeywell Corporation until 1970.
They returned to Lake Bronson where she worked at Arctic Cat in Karlstad until it closed. In 1981, Shirley started working for the Kittson County DAC, where she worked for the next 28 years. She retired at age 75. Shirley’s faith was the foundation of all she did. She was a lifelong member of the Community Covenant Church in Lake Bronson where she was actively involved in church and Sunday school. She enjoyed learning and sharing her faith and was blessed to travel to Israel in 2000 and 2004.
Shirley is survived by: her family, Galen (Carol) Bronson, The Villages, Fla., Gary (Judy) Bronson, Lake Bronson, and Connie (Barry) Olson, Lake Bronson; grandchildren and great-grandchildren, Jason Bronson; Janel (Chris) Hart and children, Katie, James and Jessica; Jamie (Jeremy) Reese and children, Easton and Brayden Fossell, Elin and Blayne; Shari (Neil) Knutson and children Hannah and Ella Kasprowicz; Jeremy (Anna) Olson and children, Chiara and Carter; and Jenalea (Jon) Duray and children, Jillian and Jaxton; and a brother, Steve (Jeanne) Jacobson, Bismarck, N.D.
She was preceded in death by: her parents; husband, Glen; and brothers and sisters-in-law, Winfred (Helen), Jacobson, Elwood (Vivian) Jacobson and Lowell (Helen) Jacobson.
A Celebration of Life memorial service was held on Thursday, Feb. 3, 2022, at 2 p.m. at the Community Covenant Church, Lake Bronson. Visitation was held in the church for one hour prior to the service. Rev. Gary Barrett, presiding; Corienne Jacobson, soloist, and Sharlene Klegstad, organist. Casket bearers will be Jason Bronson, Jeremy Olson, Jeremy Reese, John Duray, Neil Knutson and James Hart.
Austin Funeral Chapel, Hallock, was in charge of arrangements. www.austinfuneralchapel.com.