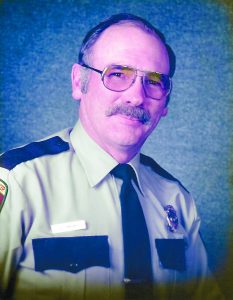 Sidney Byron Lawrence, 94, passed away on Jan. 18, 2022, at St. Joseph’s Hospital in Park Rapids, Minn.
He was born in Worthington, Minn., on March 6, 1927, to Walter and Clara (Fischer) Lawrence of Sherburn, Minn. The family moved to Rushmore, Minn., in 1929. He attended school in Rushmore until 1933 when the family moved to Worthington. In 1940, the family moved to a farm in Larken Township near Rushmore. Sid attended country school and later attended Worthington High School. In 1945, Sid entered the military service (Army). He was stationed in Kitzingen, Germany, as a Military Policeman.
He married Dorothy Schlapkohl on Dec. 21, 1948, at the Mission Baptist Church of Worthington. They farmed in the Rushmore and Worthington area during the first 15 years of their marriage.
Sid moved his family to Hallock, Minn., in 1963 when he started work for the state of Minnesota as a conservation officer in Kittson County. While raising his seven children, Sid was a member of the Northern Lites Gun Club, the Hallock Fire Department and a Boy Scout Leader.
While in Hallock, his hobbies included all things related to camping, hunting, fishing and wood working. He was an avid gunsmith who enjoyed reloading and collecting firearms.
In October of 1985, Sid retired from the DNR. In November of 1986, he and Dorothy moved to Park Rapids.
While in the Park Rapids area, he began restoring FarmAll tractors, which he collected along with Maytag engines. He enjoyed auction sales and flea markets as a way to find and collect antiques.
Sid was of member of the American Legion in Park Rapids. Sid and Dorothy were members of the Lake Itasca Pioneer Farmers and also enjoyed participating in the Headwaters Chapter of Good Sam. They were able to travel many miles on their Harley, enjoying the great outdoors or simply a trip to Dairy Queen.
Before and after retirement, Sid and Dorothy enjoyed travelling, usually in their RV. They covered all 50 States, 12 of Canada’s 13 Provinces, two-thirds of Mexico and approximately one-third of Europe.
Sid was a member of the Presbyterian Church in Hallock and attended the Riverside Methodist Church in Park Rapids.
Sid is survived by his four sons and two daughters: Kay (Laren) Sauter of Box Elder, S.D., Bruce (Lynae) of Thief River Falls, Minn., Michael (Julie) of Park Rapids, Thomas (Emmy) of Menagha, Minn., Barbara (Frank) O’Hara of Pembina, N.D., and James (Theresa) of Stevens Point, Wis. He is also survived by 25 grandchildren, 25 great-grandchildren and three great-great-grandchildren.
Sid is also survived by: his sister, Norma Nelson; sister-in-law, Minnie Apel; and son-in-law, Philip Muir.
Sid was proceeded in death by: Dorothy, his wife of 70 years; his daughter, Patricia; great-granddaughter, Maci; brother and sister-in-law, Roger and Lorraine Lawrence; brother and sister-in-law, Melvin and Helen Van Roekel; brother and sister-in-law, Eugene and Kay Scott; and brothers-in-law, Curtis Nelson, Kenneth Apel and Herb Schlapkohl.
A memorial service will be held at the Presbyterian Church in Hallock on Saturday, May 21, 2022, at 10:30 a.m. Internment will take place at the Union Liberty cemetery following the service.
Austin Funeral Chapel, Hallock, is in charge of the arrangements. www. austinfuneralchapel.com