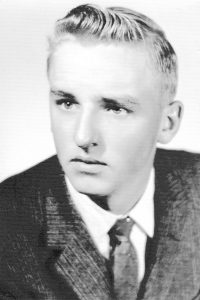 Vern Leonard Johnson, 79, died peacefully in Bishop, Calif., on Jan. 26, 2022, after a short illness.
A conversationalist by heart, Vern was known to have a brilliant mind. He loved science, especially geology and astronomy, and the famed scientists, Carl Sagan and Stephen Hawking, were foremost on his list of personal heroes. Fossil hunting, stargazing and lengthy discussions on the nature of the universe were common activities throughout Vern’s life and part of what drew him to live in the Eastern Sierra – a region he considered stunningly beautiful by day and by night. He particularly loved the mountains; a feature not present anywhere near where he grew up.
He was born in 1942 in northwestern Minnesota in Spingbrook Township, Kittson County, to Reuben and Verna Johnson, “Butch,” as he was nicknamed. He was raised on a family farm with his older siblings, Helen and Earl. Farm life made him strong, hardworking and honest. It was this rural setting that first exposed Vern to the wonders of nature and a star-studded sky. Not surprisingly, it also demanded he acquire a deep working knowledge of machinery. Consequently, Vern could fix about anything as evidenced by the small home he singlehandedly restored from something that might otherwise have been demolished. That home is still occupied.
The above merits are part of what drew Vern to enlist in the U.S. Army wherein he was trained as an aircraft mechanic and earned the Expert badge for rifle marksmanship (the highest level for that weapon). He was immensely proud of this for the rest of his long life and anyone who went target shooting with Vern could tell he was an excellent shot.
After receiving an honorable discharge, Vern married, moved his small family to Owens Valley, and eventually found employment as a deputy with the Inyo County Sheriff’s Department where he ascended to the rank of sergeant. He was described by colleagues and inmates alike as being fair and honest and was also known by law enforcement officers throughout the county as “The Voice” because of his deep rich baritone that could have made any singer envious. When this voice was brought to bear against a suspected outlaw, it could make a man wither.
Vern left law enforcement after 10 years and eventually moved back to the region of his birth where he found a peaceful life closer to his siblings.
There, he was preceded in death by his brother-in-law, Clarence Gruhot, and by his wife, Janice Johnson. This crushing event inspired his return to Owens Valley in 2007 – perhaps the second-greatest love of his life – where he lived out his remaining years.
He is survived and missed dearly by: his children, April (Albert) Branca, Carl (Megan) Johnson, and Juli (Raoul) Mijares; his brother, Earl (Linda) Johnson; and sister, Helen Gruhot; grandchildren, Elena and Elizabeth Mijares, Seth and Royal Cline; and many nieces and nephews.
A celebration of life service to be announced.