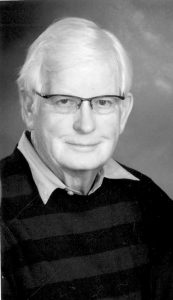 Neil Allan McEwen, 84, of Crosslake, Minn., passed away in the presence of his family on Saturday, March 12, 2022.
Neil’s life and passions were deeply rooted in the people, places and values of northwest Minnesota. Born March 19, 1937, in Humboldt, Minn., he attended school there before graduating from Hallock High School in 1954. Neil then took a job on the Great Northern Railroad, sparking a lifelong love of railroads that he pursued through memorabilia collecting, train travel and sharing of railroad stories. In 1956, Neil and Maxine married and began their journey together of 65 years.
Neil attended the University of North Dakota, where he earned a bachelor’s in accounting and then a law degree. While serving on the editorial board of the university law review, Neil authored a scholarly article on antitrust that informed a Supreme Court decision on a pending railroad merger.
Neil served the people of northwest Minnesota through zealous advocacy and dedicated community service. He forged a legal career helping others to navigate challenges, correct injustice and achieve prosperity. Over 30 years, Neil built and operated a broad law practice in Thief River Falls, Minn., while also serving for a time as Pennington County attorney. Throughout this time Neil held positions of leadership and influence in the region, leading the Pennington County DFL party and serving as member of the church council of Redeemer Lutheran Church, the Thief River Falls Public Library board, and the Thief River Falls Lions Club. Neil’s legacy as a lawyer and community leader is in the lives he improved through generosity, determination, humility and an unfailing sense of right and wrong.
Neil was passionate about and skilled in sports-especially curling and golf. He competed successfully in tournaments and bonspiels throughout northwest Minnesota and beyond. In retirement, he continued to find joy on the course, whether as a player or spectator.
At the center of Neil’s life, however, were family and friends. He was a caring son and brother, supportive husband, devoted father, doting grandparent, and loyal friend. Whether in Thief River Falls, Crosslake, Mt. Dora, Florida or Sun Lakes, Ariz., the McEwen home was always open to Neil and Maxine’s large circle of friends and family. Following Neil’s early retirement, the couple enjoyed over 25 years in which to pursue their shared interests together. They traveled extensively, both in the U.S. by RV and on the European continent with extended stays in Sweden and Switzerland. Neil and Maxine treasured close friendships and liked nothing better than to jump in the car to drive and visit some of the many friends they had acquired over the years. With Maxine, Neil made it his priority to be present in the lives of those he loved, and his impact on them was far greater than he ever could have known.
He is survived by: his loving wife, Maxine (nee Lysfjord); son, Gregory; daughter, Gretchen Felton (Brian); grandchildren, Joia, Cody and Holden; and siblings, Elizabeth Deere and Ortie Kinshella.
He is predeceased by: parents, Lorne and Josephine McEwen; son, Garth; and siblings, Doris West, Helen Erickson, Peter McEwen, Lorne McEwen and Ruth Moose.
A memorial service will be held on Wednesday, May 11, 2022, at Crosslake Lutheran Church. There will be a gathering of family and friends at 12 p.m., and the service will begin at 1 p.m., with a lunch to follow. A livestream of the service will be shared at www.crosslakelutheran.com. Memorial contributions may be made to Crosslake Lutheran Church.
Arrangements are entrusted to Brenny Family Funeral Chapel, Crosslake.