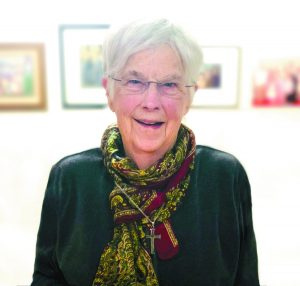 Harriet Lorraine (Wilmer) Sanner, 90, of Lancaster, died Sunday, April 10, 2022.
She was born Nov. 24, 1931, to Axel and Alice (Peterson) Wilmer in Drayton, N.D. Grandma’s family moved from Drayton to Williams, Minn., when she was 3, and she made the move riding in a dresser drawer. She graduated from Williams High School in 1950 and then attended Bemidji State Teacher’s College for elementary education. From there, she took a teaching job at Lancaster in the fall of 1952. The school’s elementary wing was being built that year, so she taught her 42 second graders in the basement of the Sion Lutheran Church until her classroom was ready.
One day she needed orange juice and toilet paper, and there she met Sanner’s Store owner, Glenn Sanner. They didn’t waste any time. Their first date was at the Fireman’s Ball in December, they were engaged by March, and married on June 30, 1953, a Tuesday at 8:30 p.m. (Grandpa and Floyd had to close the store first and get to Williams).
After getting married, Grandma taught for two more years before having Lynn, Gary and Shelly. She taught Head Start for one year before Jennifer was born. Grandma then stayed home, cared for her family, and worked at Sanner’s Store and Button Button.
Harriet loved her community. She once said, “I never planned on staying here forever, but I’m sure glad I did.” She was active in quilting, Sion Lutheran Church, a lifetime member of The American Legion Auxiliary and served as chaplain, and was a Lions member for 25 years.
Missing her contagious laugh and genuine sweetness are: her husband of 68 years, Glenn; their three daughters, Lynn (Bill) Moore of Hallock, Shelly (Owen) Westerberg of Lake Bronson, and Jennifer (Dave) Roesler of Minneapolis; nine grandkids, Ingrid (David) Kemp, Courtney (Alicia) Moore, Ashley (Shardul) Srivastava, Alex (Kelsey) Moore, Vada (Zach) Gatheridge, Macy (Tyler) Cosley, Judah Westerberg, Chad (Heather) Roesler, and Jenna Roesler; 12 great-grandkids, Jack, Svea, Deacon, Neve, Tate, Rishi, Riya, Harriet, Kaydence, Myles, Posy Harriet, Blake and Autumn; along with sister, Marilyn (Gene) Bitzer of Warroad; and brothers, Harvey (Eileen) Wilmer of Warroad, Minn., and Dennis (Lois) Wilmer of Fergus Falls, Minn.; sisters-in-law, Sunny Wilmer of Warroad and Margaret Wilmer of Roosevelt, Minn., and brother-in-law, Jim Menke of Roseburg, Ore.; many nieces and nephews.
Waiting for her in heaven are: son, Gary; her parents; sisters, Elaine Wilmer and Verna Menke; brothers, Lloyd Wilmer and Dale Wilmer; and infant granddaughter.
Funeral services were held for Saturday, April 16, 2022, at 2 p.m. in Sion Lutheran Church, Lancaster. Interment will be in Riverview Memorial Garden Cemetery, Lancaster. Visitation was at the church for one hour prior to the service. Rev. Andy Graves, presiding; Ingrid Kemp, reader; Diane Rice, organist; special music, Neve Moore and Kaydence White. Casketbearers will be Harriet’s grandchildren. Honorary casketbearers will be Harriet’s great-grandchildren.
Austin Funeral Chapel, Hallock, was in charge of the arrangements. www. austinfuneralchapel.com.