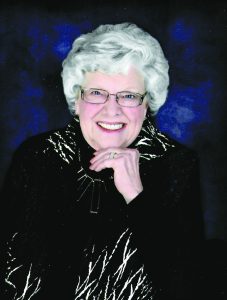 Maxine Enid Hanson Holmquist passed away peacefully at Riverview Health in Crookston, Minn., on April 29, 2022, surrounded by her family.
Maxine was born in Hallock, Minn., to Enevol and Florence (Danielson) Willadson on Sept. 8, 1933. She attended school in Hallock, graduating in 1951. She attended the College of Medical Technology and X-ray in Minneapolis, Minn., and worked for Dr. G.A. Knutson in Hallock until her marriage to Ronald Hanson at Hallock in September of 1953. They lived in San Francisco where her first daughter was born and moved to Orleans, Minn., where four more children were added to their family.
She worked for the United States Customs for 10 years earning an Outstanding Performance Award in recognition and appreciation for noteworthy contributions. Maxine continued her education, completing the course in medical secretary at the Grand Forks AVTI in 1986 and worked seven years with children with disabilities in the East Grand Forks school system.
Maxine was married to Charles Peter Holmquist in Fargo, N.D., on Feb. 19, 2011, bringing into the family his five children, Craig (Sherrie) Holmquist, Vickie (Ken) Hubert, Keith (Marie) Holmquist, Paul (Colleen) Holmquist, and David (Deb) Holmquist and their families. They established their home in Crookston where Maxine actively participated in Trinity Lutheran Church, their quilting group, the activities of Women of the Evangelical Lutheran Church of America and other community organizations.
Maxine is survived by a sister, Dale Morgan, of Beaumont, Calif.; brother-in-law, John Younggren of Hallock; sister-in-law, Marcia Willadson of Torrington, Wyo.; daughters, Kim Kraska (Doug), Ronna Linroth (Terry), and Julie Kraska (Dwayne); son, Mark (Sonja); and son-in-law, Terry Kent. She is survived by grandchildren, Krista, Kyle (Nicole), Lucas (Maja), Logan (Jen), Tyler (Alyssa), Jordan (Rebecca), Brian (Laura), Andrea (Chris), Danika (Allan) and Dylan (KayLeigh). She has 13 great-grandchildren, Makenna and Mason; Cooper, Case and Cash; Jazzlyn, Thomas, Emma and Vivian; Charlie, Maggie, and Parker, and Harvey. She leaves behind numerous nieces, nephews, and cousins.
She was preceded in death by her husband, Chuck Holmquist; her daughter, Kathy Kent; parents; sister, Mae Younggren; and brothers, Donald, Rodney, and Bryce.
Maxine bequeathed her body to the Department of Anatomy and Cell Biology at the University of North Dakota School of Medicine and Health Sciences in Grand Forks, N.D.
The family of Maxine Holmquist will be hosting a Celebration of her Life Friday, May 6, 2022, 4 p.m., at the Trinity Lutheran Church in Crookston with Rev. Greg Isaacson, officiating. Visitation will be for one hour prior to the service.
Messages of condolence may be made to the family at www.stenshoelhouske .com.