By Anna Jauhola
The public can expect construction in Hallock to continue through mid-September at the least.
Due to rain and having to reconstruct some curb sections, the Minnesota Department of Transportation has extended its project, which was scheduled to end this month.
“I talked with the contractor this morning (Thursday, Aug. 11) and they’re looking at being just about a week behind,” said Cole Nelson, MnDOT construction engineer, who is in charge of the Highway 75/175 project. “They were planning on starting some patch paving by the curb and gutter at the end of this week. The reality is, it’ll be the end of next week or the following week.”
Highways 75 and 175 were reconstructed in 2001, at which time the road was widened and sidewalks were installed. Some sidewalks came out at a 10 percent grade, which led to the roads being pegged for lack of Americans with Disabilities Act (ADA) accessibility. Davidson Construction is the contractor on the job.
The contractor and MnDOT have been keeping a close eye on the sidewalk and curb situation so as not to repeat the same mistakes from 20 years ago.
“As construction progresses, we have to do the ADA compliance checks on the sidewalks,” Nelson said. “So far, we’ve had most of it meet our requirements. The sections that have not, have been removed and replaced. But that’s going pretty well. Most of the cross slope is less than 2 percent, which is what it needs to be, to be compliant.”
Nelson said the curb ramps are also falling into place correctly, even though they have a lot more requirements. So far, one was installed too steep and will be removed to be reconstructed.
“The contractor sets up their forms, we help check them to make sure they work,” Nelson said of the process. “But as they’re finishing, they do have a risk of changing some of those slopes. It’s something we see on our projects. These ramps are pretty tight and can get a little out. We’re required to replace them and make sure they’re compliant.”
Several people around town, including the Hallock City Council and its mayor, wondered out loud about the boulevards left full of dirt along Highway 75 between Dollar General and the PKM Electric building. Nelson said he’d heard there was confusion, spoke directly with the mayor and explained the grass boulevards were always in the plans. There are also grass boulevards along most of Highway 175 — all west of the railroad tracks and east of the Caribou Budget hotel. During the concil meeting on Monday, Aug. 8, councilors wondered whether the grass would even grow because of the amount of salt/sand used during the winter.
Nelson admitted the first year after installing grass boulevards is tough for them, but they often rebound and grow nicely, leaving a pleasing look along the new construction. He said the purpose of installing the grass boulevards was to save on project cost — concrete is expensive — and for a more aesthetic look through town.
Although he said it is not a huge maintenance burden, Nelson is unsure who then maintains the grass boulevards — the city, the business owners or the state.
Nelson specifically commented on providing temporary access for residents along Highway 175.
“I know people were made and wanted their driveways back,” Nelson said, adding they’re doing their best to provide access. However, he noted that when they pour concrete curb and gutter, it takes generally four days for the concrete to set to the strength needed.
“We’re not trying to leave people without a driveway for weeks on end. That’s not our intention,” he said. “But if we drive over a nice new curb with a piece of equipment and break it, then we start again. We need to get strength in that curb.”
Also, to pour curb and gutter, they must remove the temporary driveway, lay all the rebar and material before pouring concrete. Nelson said residents have been able to park on the south side of Highway 175 when their driveways were inaccessible.
Along that stretch, there are no alleyways behind the houses.
The next steps the public will see as they drive through town is construction crews filling the gap between new concrete curbs and existing pavement. Once that’s complete, the contractor can begin to mill off 2 inches of the existing pavement and begin to repave the highways.
The last part of the project will be delayed for an undetermined amount of time. The street lights that were ordered to replace the ones on the east side of Highway 75 and north side of Highway 175 are delayed.
“I don’t know how far they’re delayed,” Nelson said. “I’m not saying they’ll be here in December. They say we don’t know when they’ll be here.”
The good news is that street lights on the west side of Highway 75 and south side of Highway 175 are still standing and operating.
So though harvest, sugar beet prelift and the beginning of school, the public should expect continued construction. Nelson said they’re working on getting this project right, considering the amount of conflict it has caused.
“The last project didn’t provide the results people were hoping for. Our hope for this project is when we are done, and gone, hopefully the city of Hallock and all the residents are happy with what we put in,” Nelson said. “The walk and ramps that were there, it was pretty bad. They didn’t weather super well.” 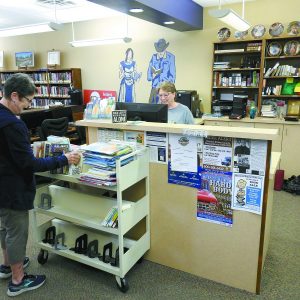