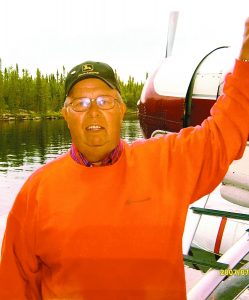 James H. Larson, 77, of Kennedy, Minn., passed away at Kittson Memorial Healthcare Center in Hallock, Minn., on Monday, Oct. 31, 2022, surrounded by his family.
James (Jim) was born in Grand Forks, N.D., on Feb. 22, 1945, to Ronald and Erlyce (Lindberg) Larson. His faith was very important to him and was baptized and confirmed in the Christian faith at Maria Lutheran. He graduated from Kennedy Public School in 1963. He met his sweetheart, Nancy Pemberton, at a youth retreat in Thief River Falls, Minn., in the spring of 1963. They were married on Dec. 27, 1966, at Grace Lutheran Church in Hallock.
He graduated from Moorhead State University in 1967 with a bachelor of arts degree. The newlyweds moved to Bismarck, N.D., where he went to work for Firestone Tire Company as a salesman, on the road six days a week. After a year, they moved back to Moorhead, Minn., where he completed his bachelor of science degree.
Jim and Nancy moved to Warren, Minn., in the summer of 1968 where he taught industrial arts for 10 years and was head of the department. He loved working with woods and metals. His students had many great project such as wooden canoes, gun cabinets, clocks and snowmobile trailers. He enjoyed spending time with his co-workers as they had many trips snowmobiling and ice fishing at Lake of the Woods. He also drove school bus and coached wrestling during his time there.
In 1977, Jim moved his family back home to Kennedy where he began farming with his father and later, with his son. He enjoyed raising wheat, sugar beets and soybeans. Jim retired from farming in 2009.
Jim loved fishing. He spent countless hours at the cabin at Lake of the Woods with thousands of hours spent on the water catching walleyes. He had great trips to Michigan fishing for salmon with his Larson cousins, ocean fishing on the Gulf of Mexico and also in Alaska and Florida. Lake of the Woods was his favorite, as he loved pulling spinners and trolling on the reefs. Jim and Nancy had so many adventures together. They covered most of the 48 states and even made a couple trips to Alaska, where he, of course, fished.
Jim loved people and conversation His quick wit always made people laugh and smile. He would be the first to tell you that he had a great life. He will be missed!
He is survived by his loving wife of 55 years, Nancy; a son, Paul, Kennedy; daughter, Karen, Stephen, Minn.; grandchildren, Austin (Katie), Tucker (Gabby), Tyler (Macy), Carter, Megan, Emma, Kate and Steph; great-grandchildren, Baron, Gavin and Sutton.
Jim was preceded in death by his parents and his sister, Gail.
Funeral services were Monday, Nov. 7, 2022, at 2 p.m. in Maria Lutheran Church, Kennedy. Visitation was held at the church for one hour prior to the service. Pastor Kathy Levenhagen, presiding; Patti Swanson, organist and Ron Fossell, soloist. Honorary pall bearers were family and friends.
Austin Funeral Chapel is in charge of arrangements. www.austinfuneralchapel.com.