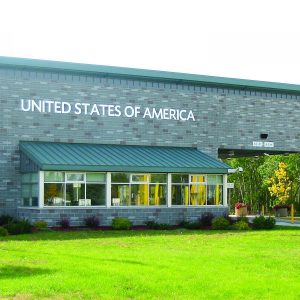 LANCASTER PORT OF ENTRY hours remain 6 a.m. to 6 p.m. and the city of Lancaster is working to get an extension so the summer hours are extended to 8 p.m. (Enterprise file photo)

By Anna Jauhola
The Lancaster City Council is working with state and federal officials to get extended hours at the Lancaster Port of Entry starting summer of 2023.
According to COVID emergency rules, councilors Luke Nordin and John Stenquist attended virtually and appeared on video during the regular meeting on Monday, Nov. 14. The council voted by roll call vote and Mayor Mike Olson was absent.
They discussed a recent meeting with U.S. Customs and Border Protection in Pembina, N.D., which Councilor Faye Potrament and City Clerk Carol Johnson attended. The meeting specifically addressed the reduced port of entry hours at stations like Lancaster.
“Mostly, they really stressed on the number of vehicles going through the borders,” Potrament said. “That has decreased all along the northern border from Seattle on this way. … At the end, Tina Smith’s representative was online with us and he suggested there had been a couple of ports in North Dakota that were granted a 120-day extension. He said, ‘Why can’t Lancaster do that?’”
Starting January 2018, U.S. Customs and Border Patrol reduced port of entry hours along the northern border. Until that year, Lancaster’s port was open until 10 p.m. Then it was reduced to 8 p.m. When COVID hit in 2020, the closing time was set to 6 p.m. year-round.
After the meeting, Johnson then composed a letter to send to Gov. Tim Walz, Sen. Tina Smith and Sen. Amy Klobuchar. She said the only way to get port hours extended is by a literal act of Congress. The letter explained the loss of traffic between the U.S. and Canada along Highway 59 has had a huge impact on not only local businesses, including the city itself, but also personal family connections, trucking, tourism and on other communities further south.
“We talked about families who live on both sides of the border, who have to drive an additional 40 miles around to use the Pembina port,” Johnson said. “We asked them to please help us restore the extended summer hours to the Lancaster border crossing.”
From previous correspondences, Johnson has received answers from Walz’s, Smith’s and Klobuchar’s offices, noting they are all working on the issue.
“One thing they really stressed is we have to coincide with the same hours as Canada,” Potrament said.
The council did not take any official action on the letter. Instead, they agreed Johnson should send it off and get the ball rolling.
In other business, the council:
• Approved designating the Kittson County Courthouse as the polling place for the city of Lancaster in a 3-1 vote. Councilor Kathy Bernstrom voted against, stating she was unhappy with the ballot issues during the November general election.
• Approved an extension of Shannon Bowlin’s leave of absence as manager of the Lancaster Liquor Store. Bowlin wrote the council a letter to inform them she will return to Lancaster in late December, and would like to continue as the Liquor Store manager.
• Approved a 3:2 off-sale beer license renewal for Bernstrom Oil.
• Received more information from Johnson regarding the 2023 payroll rates and the 2023 budget. The council tabled both issues until the December meeting when all council members are present to discuss and approve the items.
• Approved the increased annual rate for the regional safety training group the city belongs to. The new cost is $742.50 per year. Johnson said they get “a real bang for their buck,” specifically because the safety trainer has helped the city update all safety manuals and policies, and did a mock OSHA inspection.
• As the canvassing board, approved the balloting abstract from the county for mayor and council seats.
The next meeting is scheduled for Wednesday, Dec. 14 at 7 p.m. This is also the council’s Truth in Taxation meeting.