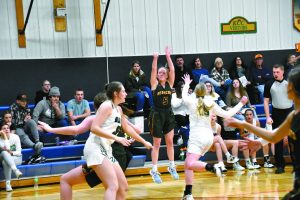 KCC 89 – CF 77
The Bearcats girls started the week with three games on the docket. They were able to get their first two contests played and in the books on Monday, Dec. 12 and Tuesday, Dec. 13 but then Mother Nature took over and brought the week to a screeching halt.
The Monday night matchup brought the Climax-Fisher Knights to town. The first half was an evenly played contest with the two teams exchanging leads on a number of occasions. KCC’s full-court defense kept pressure on the Knights and made every possession high-paced and intense. The Bearcats poured in 43 first-half points, but Climax-Fisher answered with 39 of their own to keep the game very much in balance with a 43-39 halftime lead for KCC.
…
KCC 69 – RLF 62
The Bearcats switched home floors for the Tuesday night game and hosted the Red Lake Falls Eagles in Lancaster as Mother Nature started to flex her muscles for the remainder of the week.
KCC jumped out quickly on the Eagles. The Bearcats’ full-court pressure and aggressive offensive play propelled them to and 18-2 lead in the opening minutes of play. The Eagles kept plugging away and slowly chipped into the KCC lead, and closed the gap to 36-30 at the end of the first half. The Bearcats had seven players score in the opening half, but they also had eight players commit fouls in the opening stanza. The fouls led to free throws for the Eagles, which aided RLF in keeping the game close and within reach.

Read the full story in the Dec. 21, 2022, edition of the Kittson County Enterprise.