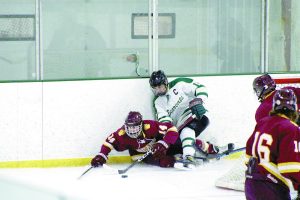 NO. 9 TYLER HENNEN goes in for a shot against LOW Bears.

By Dylan Johnson
The KCC Bearcats hockey team played the Lake of the Woods Bears on Thursday, Dec. 29, for their last game of 2022.
The Bearcats started off the game strong, with a dominating pace and two goals from Hayden Olsonawski. Dana Brown added another goal to the board during the first period. The first period ended with a score of Kittson County leading 3-0.
Lake of the Woods scored the first goal of the second period. The Bearcats then went on to score 4 more goals in the second period. Three of them were scored by Hennen, and one was scored by Ethan Hanson.
During the third period, the Bearcats and Bears each scored 1 goal, leaving the Bearcats with a well-earned win of 8-2. Jameson Turner had 20 saves for the game.