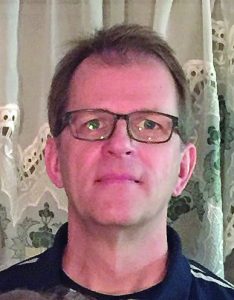 Stan A. Stancyk, 60, Fargo, N.D., formerly of Strandquist, Minn., died suddenly Friday, Dec. 29, 2017 at Sanford Hospital, Fargo, N.D.
Stanley Anthony Stancyk Jr. was born May 31, 1957 in Northwestern Hospital, Thief River Falls, Minn., the son of Stanley and Alice (Korczak) Stancyk. He was baptized and confirmed at the Assumption Catholic Church, Florian, Minn.
Stan attended school in Strandquist graduating with the class of 1975. Following high school, Stan worked various jobs and then attended Fergus Falls Community College for two years and completed his Bachelor’s Degree at NDSU, Fargo, in horticulture and agronomy.
Since 1990, Stan worked at NDSU as a Research Technician in the Plant Sciences Department, specializing in Durum wheat breeding.
Stan was a coordinator of the community gardens in Fargo and enjoyed giving the produce to friends, neighbors and the poor. He did so much for other people but didn’t want recognition for it. Stan was very caring, giving, kind, humble, private and spiritual. He always saw the good in people. Stan had a sense of humor, loved sports (especially Minnesota Viking football), biking, cross country skiing, walking, was a great cook and had faith in his 1995 green Ford Ranger with 285,000 miles.
Stan was very strong in his Catholic faith and prayed for his family and friends when in need. He had an unconditional love for his Mom and his entire family who lovingly called him Sonney.
Survivors include his loving mother, Alice, Strandquist; siblings, Jeanette (Curtis) Forfang, Hallock, Minn.; Marci Franson and Lucy (Tom) Scholin, both of Thief River Falls; nephews, Jeremy (Jami) Seng and their children Emma, Amelia, Kiera and Grace, Justin Seng and his daughter Anabelle and step-sons Peter, Jeffrey (Heather) Franson and their daughter Chloe, Jordan Forfang, Kayden Scholin; and many other relatives, co-workers and friends.
He is preceded in death by his father, Stanley Sr. in 2004; and his grandparents John and Frances Stancyk and Anton and Victoria Korczak.
Mass of Christian Burial was held at 1:30 p.m. on Wednesday, Jan. 3, 2018 at St. Bernard’s Catholic Church, Thief River Falls, with Father Rick Lambert presiding and Father John Kleinwachter concelebrating.
Visitation was held from 5 – 7 p.m. with a 7 p.m. prayer service Tuesday, Jan. 2, 2018 at St. Bernard’s Catholic Church. Visitation was also one hour prior to the funeral on Wednesday.
Condolences may be sent at www.johnsonfuneralservice.com