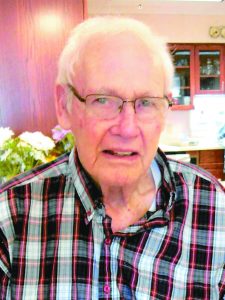 William “Bill” Farbo died on Tuesday, Sept. 24, 2019, at the age of 87 at Perham Living in Perham, Minn.
Bill was born on May 5, 1932, the eldest of eight children to Odd and Fidessa (Wilkie) Farbo at their farmstead in Blooming Valley Township, Roseau County, Minn.
Bill lived with his parents most of his life, moving with them from the Blooming Valley farm in the spring of 1970 to a farm north of Greenbush, Minn. In the fall of 1981, they moved to a farm north of New York Mills, Minn., where he resided until moving to Perham.
Bill received his schooling in a one room school two miles from his home. He worked on farms in Kennedy and Lancaster, Minn., for several years. He also worked construction jobs in Grand Forks, N.D., before returning to the Blooming Valley farm. He continued farming in Greenbush and then in New York Mills until he retired in 2005.
After retirement, Bill met with several retired gentlemen at the bakery in New York Mills to shake for coffee and play “6-5-4” until the bakery opened for business. Bill also became a taxi for his sister, Eileen, who lived with him on the farm and for his sister, Pat, who didn’t drive.
Bill enjoyed playing bingo and going to the casino. He also enjoyed visiting his nieces and nephews in the area. Watching game shows on TV was also a favorite pastime.
Bill is survived by: his brother, Richard (Darlene) Farbo; sisters, Pat Udelhofen, Dinah (David) Burkel and Eileen Farbo; special friend, Rose Neseth; brother-in-law, Richard Phillips; along with numerous nieces and nephews.
Bill was preceded in death by: his parents; sisters, Dessie Parks, Kay Anderson and Gay Phillips; brothers-in-law, Bill Parks, Lowell Anderson and Ray Udelhofen; nieces, Tina Burkel-McKeever and Marion Phillips; and nephews, Mark Burkel and David Phillips.
Visitation was held from  10 – 11 a.m. followed by the memorial service at 11 a.m. on Saturday, Sept. 28 at Schoeneberger Funeral & Cremation Service in Perham. Inurnment was in the Perham Village Cemetery.
Schoeneberger Funeral & Cremation Service, Perham,  was in charge of the arrangements. www.schoenebergerfh.com.