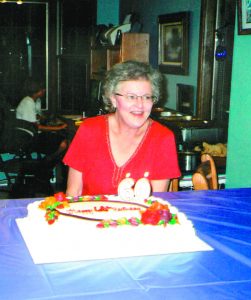 Eunice (Erickson) Steinman, 70, of Tucson, Ariz., passed away April 13, 2020, at Sapphire Nursing Home.
Eunice was born on Sept. 29, 1949, in Hallock, Minn., to Algot and Idie Erickson. She was raised on a farm in the Lancaster area, attended school there and graduated in 1968. She married Edward Steinman on July 16, 1982. She lived most of her life in Arizona.
Eunice is survived by her sister, Jeanette (Bill) Bracken, Tucson, Ariz.; two brothers, Don (Renee) Erickson, Sho Low, Ariz.; Jim (Anita) Erickson, Crookston, Minn.; several nieces and nephews and step-son, Mike (Teresa) Steinman, Austin, Texas.
She was preceded in death by her husband and parents. Interment will be in Riverview Memorial Gardens Cemetery in Lancaster, Minn.