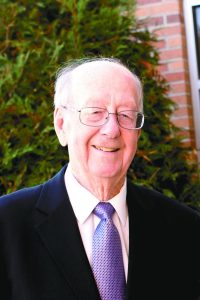 Thomas Woodrow Hughes, 94, of Hallock, Minn., passed away at the Kittson Memorial Healthcare Center in Hallock on Tuesday, Sept. 22, 2020.
Thomas Hughes was born on Sept. 11, 1926, at Virginia, Minn., the son of Thomas and Clara (Johnson) Hughes. He lived with his parents in Detroit, Mich., and Badger, Minn., before moving with his parents to Strathcona, Minn.
He attended the Greenbush High School for three years before entering the U.S. Army during WWII. He served in the Philippine Islands. After his honorable discharge he completed his last year of high school at the A.C. in Crookston. He later attended NDSU in Fargo and graduated from Worsham College in Chicago. He was employed in Middle River, Thief River Falls and Bemidji before moving to Hallock in 1968 where he owned and operated the Hughes Funeral Home until his retirement in 1992.
On June 26, 1955, he was united in marriage to Beverly Wollertson at Shelly, Minn. Bev died on Jan. 3, 2019. The most treasured thing in Tom’s life was his family and his grandchildren and great-grandchildren.
He is survived by his daughter, Jane Sobolik Kelly (Michael Kelly); three grandchildren, Stacy (Ben) Diamond, Hallock, Brett (Molly) Sobolik, Hallock, and Maia (Colin) Beger, Thief River Falls, Minn.; and six great-grandchildren, Douglas and Caroline Diamond, Nora, Blake and Josie Sobolik, and Quinn Beger.
He was preceded in death by his parents; son, Douglas; son-in-law, Blake Sobolik; and half-brother, Forest Ranum.
Funeral services were held Saturday, Sept. 26, 2020 at 11 a.m. in Grace Lutheran Church, Hallock. Interment was in Greenwood Cemetery, Hallock. Visitation was held at the church for one hour prior to the service.  Rev. Caitlin Jensen, presided; Renee Wahl, organist and Sue Albrecht, soloist. Casket bearers were Tom’s grandchildren and honorary casket bearers were his great-grandchildren. Military honors will be accorded by the Minnesota National Guard.  CDC guidelines were followed.
Austin Funeral Chapel, Hallock, was in charge of the arrangements.